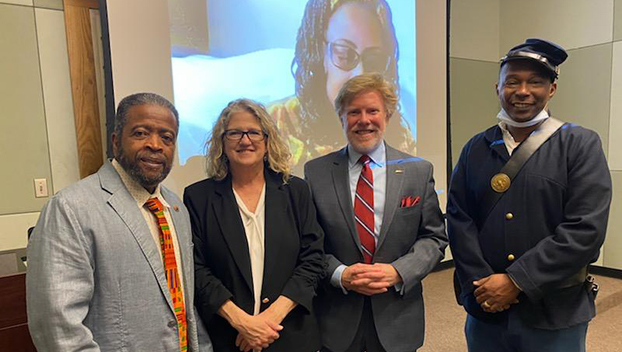 NATCHEZ – The Natchez U.S. Colored Troops Monument Committee will host a public meeting to discuss the design of its proposed USCT monument at 6 p.m. Tuesday, Oct. 4, at the Natchez Convention Center at 211 Main St.

Thomas J. Warren of Warren Studios Inc., who was approved in August as the designer for the monument, will be present to talk about the project and receive questions and comments from the public, according to Committee Chairman Robert Pernell.

“As we have said from the beginning, we want to be transparent, but even more, we want to hear from the public,” Pernell said. “We have reached an important milestone with this project, but we still have a ways to go.”

Pernell said it is important for the community to be informed, and because it is a community endeavor, the project needs community support, he said.

The monument will honor more than 3,000 African American men who served at Fort McPherson during the Civil War. It will be located on the Natchez Bluff, at the corner of Madison and Broadway streets, contingent upon approval of the Mississippi Department of Archives and History and the Natchez Preservation Commission.

Warren, who is based in Oregon, is a native of Rolling Fork. He was selected to create a conceptual and schematic design for the monument, said Lance Harris, chairman of the Monument Design Subcommittee.

“At the end of the project, we will have a conceptual design and schematic design, as well as cost estimation that can be used for fundraising efforts as we get ready for the next phase,” Harris said.

Warren has 36 years of experience working on sculptures and monument designs. A graduate of Mississippi College, he has created 53 public art works in 20 states and Canada. His past works have included monuments of Rosa Parks, Dr. Martin Luther King Jr., Medgar Evers, John Lewis, among other historic figures.

For more information on the Natchez USCT Monument Project, visit NatchezUSCTMonument.com. The works of Warren Studios can be viewed at warrensculpture.com.