HE ACED IT: Natchez man aces Duncan Park’s No.6 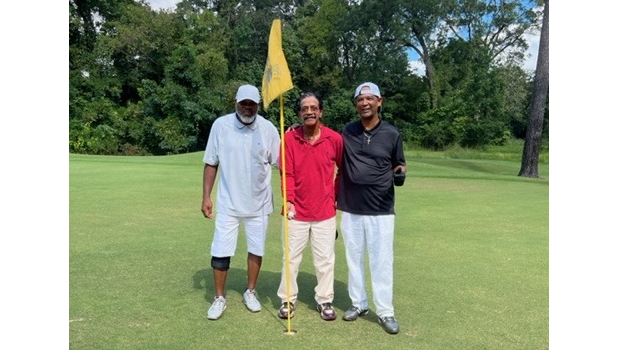 NATCHEZ — Resident Van Laurant III has played golf off and on over the years. This spring, he started playing consistently with Michael Green and Cleavon Jackson and made the shot of his life on Sunday.

Green was by the green at Duncan Park’s No. 6 when Laurant fired an eight iron at the pin and sunk his tee shot on the Par 3 to get his first hole in one. It was a 140 yard shot and while he commonly hits the green, the hole-in-one was a surprise.

“Mike said it went in and I thought he was joking with me, I was the last one to tee off,” Laurant said. “I got down there and it was in the hole. I used the club I always use on that hole. I had a shock of disbelief because I knew it didn’t happen often.”

Kelly Wilson stood on the No. 7 tee box and watched the ball go in the hole. No. 6 is Duncan Park’s “signature hole,” Wilson said. Hole No. 6 is right next to John R. Junkin Drive and features an elevated tee box with a pond before the green.

“The tee boxes there are close so we like to see how close people get,” Wilson said. “He hit it right onto the green and it rolled in. He was excited.”

He said Laurant’s group is a lively bunch and Laurant is a ball of fun. Since April, Laurant’s group have played together, picking at each other in a joking way nearly twice a week. They finished the round in the high 80s which is a good round for the group, Laurant said.

He said the hole-in-one is the best shot he has ever hit. A little bit of luck was involved as it is a par three he finds easy to hit the green. His best score for that hole until Sunday was a par. Golf requires consistent play for golfers to improve and Laurant has done so playing twice a week.

Laurant’s hole-in-one ball was removed from the golf bag and set aside. He said he doesn’t hear of many people hitting hole-in-ones at Duncan Park.

“It is unbelievable. There is no other comparison for a better shot,” he said. “Mike and Jack were congratulatory. They were pleased and seemed to be in good spirits. I think they were happy to see a hole-in-one.”