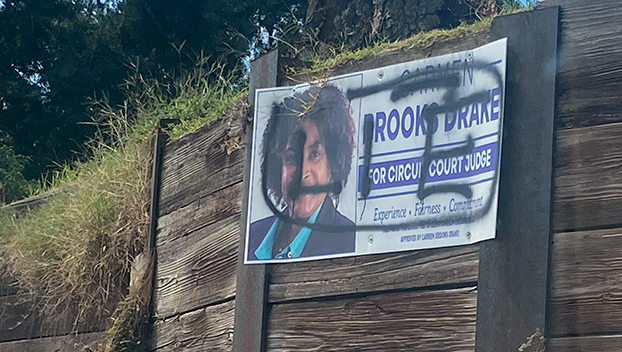 A circuit judge candidate's campaign sign that was vandalized at some point over the weekend. Adams County Sheriff Travis Patten states vandalism of this nature will not be tolerated and is asking the public to help identify the perpetrator. (Submitted photo)

NATCHEZ — Adams County Sheriff’s Office was notified Monday afternoon of the vandalism of a judge candidate’s campaign sign and is now seeking the public’s help identifying the perpetrator.

The sign, belonging to Carmen Brooks Drake who is a candidate for Sixth District Circuit Court Judge, is located at Martin Luther King Street and West Stiers Lane.

The sign had been defaced with what appears to be black spray paint at some point over the weekend, Adams County Sheriff Travis Patten said.

“There seems to be a culture forming in regard to political signs being vandalized and this
is just one of many incidents that have happened recently to candidates,” Patten said. “The citizens of Adams County are better than these acts of vandalism. It’s your right to vote for the candidate of your choosing in any election but you do not have a right to destroy their signs, which are their personal property.”

Candidates are encouraged to continue reporting incidents of vandalism, Patten said. The public is also asked to report any information that could lead to finding those responsible to the Adams County Sheriff’s Office at 601-442-2752 or, for those who wish to remain anonymous, to Crime Stoppers at 1-888-442-5001.

“Condoned behavior becomes accepted behavior and these incidents will not be
tolerated,” Patten said.