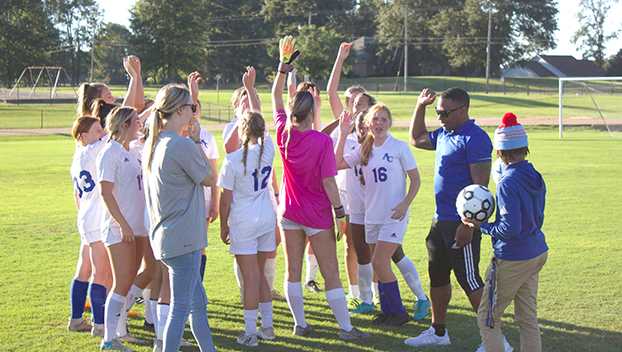 GALLMAN — Adams County Christian School went into Copiah Academy’s home stadium and came out victorious in a 6-3 win in soccer Tuesday night. The match puts ACCS at 2-2 in district play as their rivals Cathedral are 2-1 in district.

McKenzie Campbell scored four goals in the win in what was a back and forth game until the final 20 minutes, Amy Campbell said. At halftime, Copiah Academy was up 2-1 and conceded five second half goals to lose the match. Ella Wilson and Campbell Robinette scored a goal each.

McKenzie said the team had been looking for someone to make a connection with forward Ella Wilson up top. Teammates and coaches had told her she was the connection. Head Coach Chris Hughes moved the team’s pieces around and put her up top to help Ella.

“I took a lot of shots on goal but most of those went to the goalie. The goals I made came off of crashing the goal and out running the defenders,” she said. “It all started from the back of the field. Everyone on the team has a position and a role to play in the game of soccer and they did so.”

One of those players who helped create the movements for scoring goals was Jadyn Biglane, Hughes said. She took McKenzie’s spot at sweeper in the second half, played tough and distributed the ball well.

Hughes said McKenzie is a lot like her older sister Maddie Campbell. Last year, Maddie moved from center back to forward and led the team in goal scoring. McKenzie has a lot of drive and has a motor that won’t quit no matter where on the field she plays.

“She is a jack of all trades and will go wherever we need her to go,” Hughes said. “She can play anywhere and is a team player. All of the girls are like that. She is one of the best ones when it comes to playing out of position.”

AC played a solid 25 minutes to start the match but conceded a penalty due to a handball in the box and then let in a second goal. At half, Hughes spoke to the girls and told them to move forward and press the first five minutes of the second half to score a goal. They did just that, he said.

Defensively, the Rebels played well and are improving. Hughes said his message has been for defenders to be aggressive and to not be timid. This aggressive mentality helps AC win 50/50 balls and close down attacking players.

He said AC won possession and was able to maintain possession for 75 percent of the second half. However, the team will need to work on communication moving forward.

“Us coaches should not be the only ones talking,” he said.

McKenzie said she was proud of the result and her teammates for stepping up to get the job done. The win is a good start to the second half of the season for the Rebels.

It showed their intensity and ability to not only create goal scoring opportunities but to capitalize on them. Their second half performance shines a positive light on their defense by conceding one goal.

“As a team we can accomplish a lot this season if we play like we did every game,” McKenzie said.

Mallory McIlwain made her return to the match after suffering a head injury against Parklane Academy last week. She played midfield for the Rebels Tuesday night after a stint at forward.