Vidalia, ACCS look to stay undefeated; Cathedral and others look for bounce-back wins 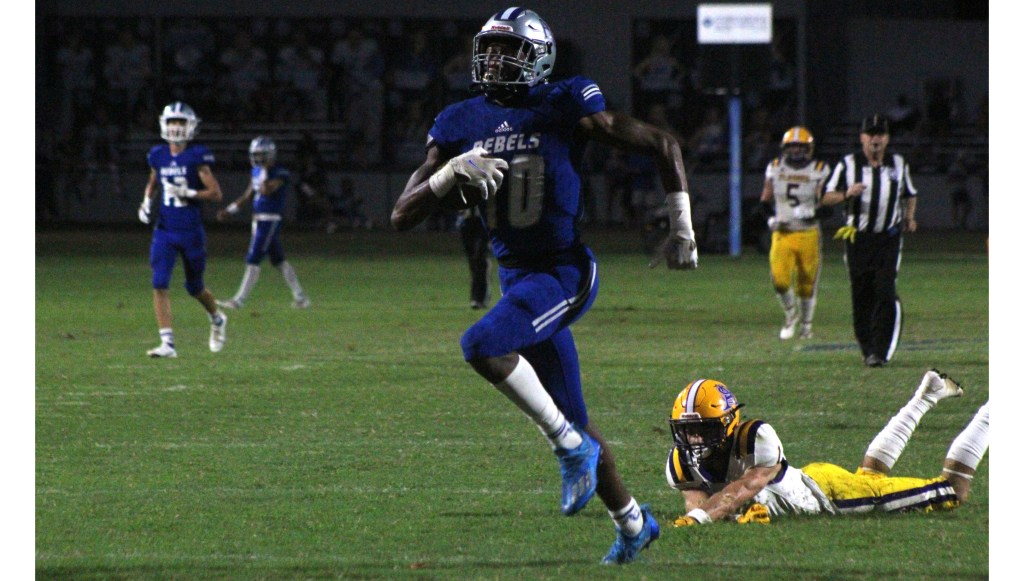 JONESVILLE, La. — The Vidalia High School Vikings, fresh off a stunning 30-29 win at home over Cedar Creek School last week after trailing the Cougars 22-0 in the first quarter, will look to stay undefeated when they hit the road to take on the Block High School Bears.

Kickoff between nearby non-district rivals Vidalia and Block is slated for 7 p.m.

While LHSAA Class 2A Vidalia goes into this game at 2-0, its best such start since 2017, Class 1A Block is 0-2 under first-year head coach Samel Washington. The Bears are looking for a much better result and performance after a rough 57-0 loss on the road to Class 4A Grant High School last Friday night.

Vikings head coach Michael Norris is looking for his team to play good football for four quarters so their defense won’t have step up in the second half like it did last week in having to not only rally from being down 22-0 in the first quarter, but also 29-8 early in the third quarter.

CENTREVILLE — The MAIS Class 3A Centreville Academy Tigers will look to get back in the winning column, but it will not be easy as the play host to the Class 5A Silliman Institute Wildcats Friday night.

Kickoff between Silliman (2-2) and Centreville Academy (3-2) is at 7 p.m. The Tigers look to rebound after a rough 47-20 loss over at Class 4A Adams County Christian School in the Rebels’ homecoming game. Despite the loss, they outgained ACCS 316 to 306, had more first downs than the Rebels (10 to 8) and were penalized just three times for 32 yards.

After back-to-back losses at home to a pair of Class 6A teams in Presbyterian Christian School and Parklane Academy, the Wildcats picked up their second win of the season last Friday night, a hard-fought 7-6 win on the road over District 3-5A foe Central Hinds Academy.

VICKSBURG — The Adams County Christian School Rebels will look to stay undefeated when they travel to Vicksburg to take on the St. Aloysius High School Flashes in MAIS District 3-4A action at 7 p.m. Friday.

While the Rebels took care of Centreville Academy in their homecoming game last Friday night, the Flashes lost on the road to Brookhaven Academy 33-16. The 16 points are the most points they have scored so far this season.

The Rebels are led on offense by sophomore quarterback Coleman Carter, who threw for 124 yards and two touchdowns as well as two rushing touchdowns last week, and on defense by the likes of Dantavios Stampley, Jordan Berry, and Jesse Grayson, who combined for seven tackles, two interceptions, and one sack.

BASTROP, La. — The Ferriday High School Trojans will look to pick up their first win of the season this Friday night, but they will have their hands full on the road with a Bastrop High School Rams also looking for win No. 1 of the 2022 season.

Ferriday came so close to getting its first win of the season last week at home against Class 4A Peabody Magnet High School, but three missed two-point conversions came back to bite the Trojans as they lost to the Warhorses 27-26.

Bastrop, a longtime playoff team in Class 4A for many years, dropped to Class 3A and so far is off to a rough start this season. The Rams were shut out in their season opener at Class 4A Franklin Parish High School 27-0 on Sept. 2 and last week were embarrassed on the road at Class 1A Delhi Charter School 32-8. This will be their home opener, which could spell trouble for a Ferriday team under head coach Cleothis Cummings, who is in his first year in his second stint leading the Trojans.

DECATUR — The Wilkinson County Christian Academy Rams finally picked up their first win of the season after a stunning 18-14 win over Christian Collegiate Academy at home last Friday night despite less-than-ideal weather and field conditions.

While the Rams held the Bulldogs to just 165 yards of total offense, they will need that kind of performance and perhaps then some to contain a Generals team that is averaging over 40 points a game.

SANDHILL — The MAIS Class 5A Cathedral High School Green Wave will try to get back on the winning track this Friday night when they travel to Rankin County to take on the MHSAA Class 2A Pisgah High School Dragons.

Kickoff between Cathedral and Pisgah is set for 7:30 p.m. because an MHSAA team is the host team for this game. If the game had been at Cathedral, kickoff would have been at 7 p.m.

Cathedral is 1-3 overall after a tough 46-7 loss on the road to MAIS Class 6A and still-undefeated Parklane Academy led by former Green Wave head coach Ron Rushing. Now they take on a Pisgah team that is 1-2 overall after a 22-6 loss at Sebastopol High School.

MEADVILLE — The Franklin County High School Bulldogs also look to get back to their winning ways this Friday at 7:30 p.m. when they play host to the Richland High School Rangers.

This will be the second straight team from MHSAA Class 4A that Franklin County will face. And they look for a much better outcome this Friday night after a 36-16 loss on the road to then-winless North Pike High School.

The Bulldogs’ offense will have to have a much better performance after being held to just five first downs and 76 yards of total offense. They will also have to cut down on the turnovers and the penalties. Franklin County turned the ball over twice and was penalized 12 times for 80 yards last week.