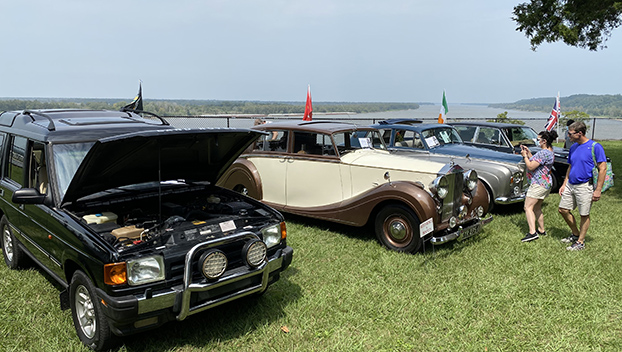 NATCHEZ — The British are coming to Natchez on four wheels, or two, during the annual Mississippi English Motor Club’s British car show this Saturday on the Natchez Bluff.

The festivities start at 10 a.m. and most cars will join the lineup by 11 a.m. on Saturday, organizer John Turbeville said. Awards will be announced at 3 p.m.

This marks the club’s 41st year of existence and 24th year of hosting shows in Natchez or across the river at the RV Park on the Vidalia Riverfront, he said.

“Most of our membership is in Jackson but we do have members in Natchez and New Orleans and we have participants with the Pensacola car club and we all trade-off — we go to their shows and they come to ours,” he said.

The show is free for spectators and $25 for anyone to register a British car or motorcycle, Turbeville said. In a good show, there are typically around 60 participants, he said.

“We take any British car or British motorcycle of any year model,” he said. “If the weather is great, good weather brings a lot of cars and so hopefully a lot of people will come out.”

Sunny skies are forecasted for all day Saturday with a high near 90 degrees.

Festivities kick off with a reception for car show participants only at Lower Lodge Antiques on Friday evening.

“Richard Branyan owns the business and is a Mississippi English Motor Club member and he’s also in the Rolls-Royce Bentley Club,” Turbeville said. “If you have a car entered or plan to enter, you may attend.”

Anyone interested in registering a car or motorcycle can do so the morning of or online at www.msemc.org, he said. Registration opens at 9 a.m. Saturday.

“Awards are people’s choice, meaning when you enter you get a ballot and the people get to vote on their favorite in each class,” he said. “There are first, second and third place trophies in every class. Generally, it’s about 20 classes of cars.”