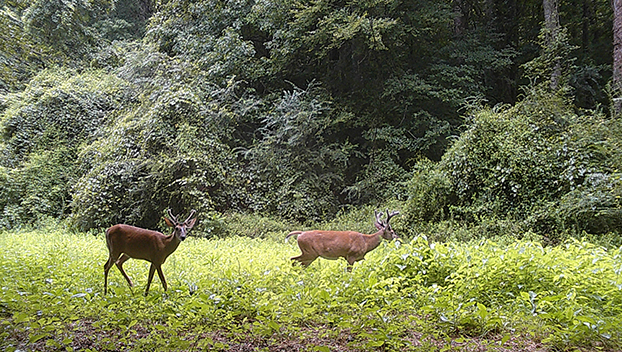 JACKSON — Mississippi Department of Wildlife, Fisheries and Parks need hunters help in combating Chronic Wasting Disease this entire deer season. The inaugural velvet season opens Friday and runs until Sunday. It allows hunters an opportunity to harvest a legal buck in velvet while helping collect data on the prevalence of CWD in the state for MDWFP through hunter harvest.

CWD is a 100 percent fatal disease caused by a prion, a mis-folded protein, that is transmissible and targets the neurological system. It is not until the later stages of the disease progression that deer begin to show symptoms of CWD. There is no cure for CWD and the only way to protect the resource is by limiting its spread through harvest.

According to the MDWFP, CWD is easily transmissible to deer through saliva, feces, urine or a contaminated environment. Mississippi has had 134 CWD cases with 127 confirmed since the first detection in 2018.

Velvet-season permits are $10 for residents and included in the $50 deer permit for non-residents. It is an archery only, legal buck only and private lands only season. All the MDWFP needs from hunters is CWD samples.

MDWFP and the MSU Deer Lab’s longtime message to hunters has been to let bucks grow old in herd management for better antler scores. MDWFP Deer Program Coordinator William McKinley said in an article from the MSU Extension Service hunters will need to change their harvest strategies in regards to protecting bucks even once they hit the legal size.

“With CWD present in the state, we now need to increase the harvest of bucks, because this disease requires prevention,” McKinley said. “If we wait until CWD numbers rise before we make this change, it will be too late. If we do nothing, this disease will manage the deer herd.”

Bucks are a target for CWD management because they are most likely to come in contact with the disease and spread the disease. A buck’s home range is typically bigger than a doe’s home range and young bucks are often kicked out of the mom’s home range once he reaches maturity. MSU’s Deer Lab has tracked a deer that traveled 18 miles away from his home range and swam the Mississippi River twice.

How to submit samples

Hunters need to preserve the head with at least 6 inches of neck attached and antlers may be removed before depositing the head. They will fill out a card at the sample location with information about where it was harvested, contact info and the card has a specific number so you can look at your results 7-10 days later. This is important because the CDC advises humans to avoid consumption of CWD positive meat because they are not sure it is safe to eat.

24 hour drop off locations for samples are available across the state and can be found on the CWD webpage. Adams County hunters can take samples to Natchez State Park or if they hunt in Franklin County to the US Forestry Service Office in Meadville.

Participating Taxidermists are also potential drop off locations of CWD samples. Tucker Crisp is in Adams County and are assisting the MDWFP collect samples. Their contact info can be found on the MDWFP CWD page.

While CWD has not been detected in Adams County, it could be in the population at a low prevalence rate and go undetected. Since 2018, MDWFP has collected 492 samples with 0 positives in Adams County.