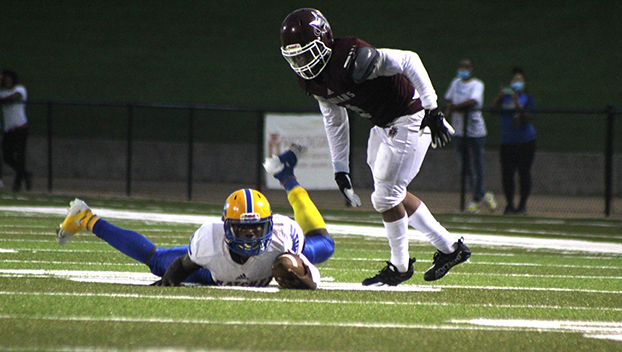 NATCHEZ — After suffering their first loss of the season under first-year head coach Steve Davis last Friday night, the Natchez High School Bulldogs are determined to get back on the winning track as they host the Hazlehurst High School Indians Friday night.

Kickoff between MHSAA Class 3A Hazlehurst (3-0) and Class 5A Natchez High (2-1) at Tom F. Williams Memorial Stadium is scheduled for 7:00 p.m. The Bulldogs will also seek to avenge last year’s loss on the road to the Indians 20-14.

Davis said it didn’t take long for the Bulldogs to get over last week’s stunning 43-30 loss at home to the Class 4A Lawrence County High School Cougars, a team he said after the game was more physical than his team was.

“We had to get over that by Sunday. We watched game film. We broke down game film just to see what we did wrong and what we did right. After that, our focus shifted to Hazlehurst,” Davis said.

And while the physicality Lawrence County used to wear down the Bulldogs was a factor last week, Davis said he does not expect Hazlehurst to be as physical as the Indians this Friday night.

“Hazlehurst is a more spread offense. They’re in the shotgun a lot. They like to run a lot of power reads, a lot of counters, a lot of inside zones. They throw the ball a lot. But they do play hard and they do play fast,” Davis said.

Natchez High’s offense will have to deal with a Hazlehurst defense that has pitched two shutouts, including last week’s 49-0 win at home over Port Gibson High School last Saturday, and allowed just six points in a 49-6 win at Wingfield High School on Saturday, Sept. 3. This will be the Indians’ first game on a Friday night since a Week 1 33-0 home victory on Aug. 26 over Newton High School.

“Defensively, they’ve got a lot of guys who like to rally to the ball. We have to win our one-on-one matchups. That will be big for like Michael Williams, Demarrco Blanton. They have to win their battles this week,” Davis said.

When Hazlehurst’s offense has the ball, the Bulldogs’ defense will have to contain junior quarterback Ashton Fair. And to do that, they may have to have more than one player bring him down because of how tall he is.

And tackling is something that has been as Davis said has been the biggest emphasis in practice this week.

“We have to tackle (better). We have to play downfield and tackle. We missed so many tackles last week. We have to be able to hit them,” Davis said.

Another key for the Bulldogs to come out victorious Friday night is that they have to play with more intensity than they have the last two weeks.

“We need to come out with some intensity. We need to sustain drives. We need to use the tempo,” Davis said. “If we can control the trenches, we can have a successful game. They use a lot of blitzes. We have to slow down their blitzes so we can get the ball to Williams, to Blanton, to Traylon Minor out of the backfield.”

Which also means that quarterback Kaden Walton has to have a better game than he did last week. Davis said that Walton was hard on himself after last week’s loss to Lawrence County and that he told Walton to let that one go and get ready for Hazlehurst. And he has.

“This week in practice he has been locked in. He’s made the right reads. He’s throwing the ball great. In the running game, he’s making the right checks. He’s been having a pretty good week,” Davis said.

With this being homecoming week, Davis said his team has been locked in on preparing for Hazlehurst and has not bothered by all the distractions that come with homecoming.

“Everybody has been at practice. Everybody’s been locked in and focused. Those same kids lost to Hazlehurst last year, so that doesn’t set very well with them,” Davis said.

As for what he expects the atmosphere to be Friday night, Davis said. “Homecoming is always pretty big. We have a lot of classes coming in to celebrate homecoming. We expect to have a crowd like the one we had for Jefferson County. A big crowd. A lot of fanfare and a lot of support.”