Man charged in the Woodhaven burglaries and drive-by shooting has original sentence revoked, being transported to MDOC facility to serve time 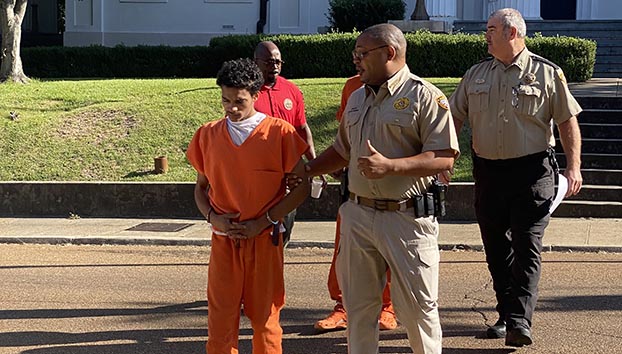 Adams County Sheriff Travis Patten escorts Xavier Jenkins back to the Adams County Jail after his sentence was revoked by Circuit Court Judge Debra Blackwell. Adams County Sheriff’s Deputies apprehended Jenkins on Aug. 24 after he was on the run from an alleged drive by shooting and multiple burglaries in the Woodhaven neighborhood of Natchez. (Submitted)

NATCHEZ — Circuit Judge Debra W. Blackwell on Friday revoked the suspension of Xavier Jenkins’ accessory after the fact of attempted murder sentence and ordered he serve the remainder of his original 15-year sentence with the Mississippi Department of Corrections.

Jenkins, 22, is charged with burglary, drive-by shooting into a dwelling and convicted felon in possession of a weapon involving crimes that took place in the early morning hours on Monday, Aug. 22, in the Woodhaven subdivision.

Jenkins allegedly burglarized multiple vehicles in that neighborhood and when confronted by homeowner Paul Leake, who was checking to see if the vehicle parked in his driveway at 2:35 a.m. was broken down and needed help, ran to the waiting car and fired multiple shots at Leake as it drove away.

One of those shots entered Leake’s home and another went into the floorboards of his porch.

Tia Grooms, 28, who has a felony conviction in Texas, is accused of being the driver during the crime and is also charged with burglary, drive-by shooting into a dwelling and convicted felon in possession of a weapon.

Grooms remains in the Adams County Jail without bond.

Jenkins was 16 years old on Nov. 5, 2016, when he was involved in the shooting of a 17-year-old. He originally was charged with attempted murder, but was allowed to plead guilty to a lesser charge of accessory after the fact because he was found to not have been an active participant in the crime. He also agreed to testify against two others who were also charged in that crime — Harry Smith, 18 at the time, and Montreal Brown, 16 at the time of the crime.

Then-Circuit Judge Al Johnson sentenced Jenkins to 15 years in prison, but credited him with a year and a half served in the Adams County Jail prior to the guilty plea. Johnson then suspended the remainder of Jenkins’ sentence and placed him on post-sentencing supervision by the Mississippi Department of Corrections.

Smith was convicted of attempted murder, as was Brown. Both are serving time with the Mississippi Department of Corrections.

On May 6, 2020, Jenkins was arrested by the Adams County Sheriff’s Office and charged with being a felon in possession of a weapon and possession of a stolen weapon. He was on post-release supervision by the MDOC at the time.

“Mr. Jenkins, this is not your first time to come before me,” Blackwell said Friday morning. “I took an oath to uphold the law and I do the best I can to protect the citizens of Southwest Mississippi. I put a lot of thought and research into the sentences I impose. I read every page of the case files. I listen to victims and all involved. I have been here as a judge for four years and before than spent 17 years as an assistant district attorney. I consider the law, the facts and information presented to me as well as my experience as a judge and prosecutor.

“From time to time, I am called upon to temper justice with rehabilitation. At least I try to do that,” she said. “I studied your file.”

Blackwell said because he cooperated in his first conviction, he was given a break.

“I put you in a Christian ministry program,” she said. “You completed that program. In fact, you excelled at that program.”

“He said you are intelligent and had great potentials, but that you are a follower,” Blackwell said. “He said the one thing he advised for you to do was leave Adams County. He said you get away from the people you were around. But you didn’t do that.”

Blackwell said she had kept up with Jenkins, checking on him with the officer in charge of his case at the Mississippi Department of Correction, Brittany Bingham, just this past June.

“She told me you were doing well, that you had gotten a job at Walmart. You had even paid on your court fines. She said you were going home to your family,” Blackwell said. “All that changed on Aug. 22”

The resident at the home Jenkins was at that early morning went out onto his porch to see if his help was needed in some way by those in the car at the end of his driveway.

“What he got from you was a barrage of bullets into his home. Thank God no one was hurt,” Blackwell said. “You are clearly in violation of the terms of your probation and I am revoking the suspension of your sentence and ordering you to serve the remainder of the 15-year sentence.”

Jenkins will be brought back to sentence for court proceedings involving the Aug. 22 charges, she ordered.