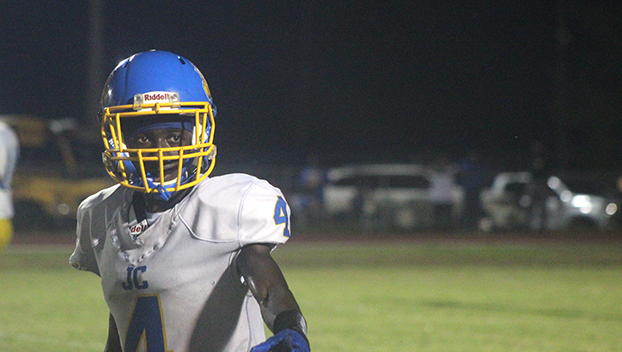 FAYETTE — The Jefferson County High School Tigers rallied from a pair of deficits thanks to a pair of fourth-quarter touchdowns to defeat the East Marion High School Eagles 32-29 last Friday night.

Despite not having one of his better games, Jefferson County junior quarterback Jabari Watson threw a 45-yard touchdown pass to sophomore wide receiver Jadavis Galtney to make it a 29-24 game and then Watson took to the ground and scored on a 28-yard run to give the MHSAA Class 3A Tigers a 32-29 lead after yet another successful two-point conversion.

Then it was a matter of the JCHS defense doing its part to preserve the come-from-behind victory and the Tigers did just that. That unit was led by Tylan Collins, who had 12 tackles and one forced fumble.

Sophomore defensive end Christopher Heard recovered a fumble by East Marion and returned it 25 yards for a touchdown. The two-point conversion was good and the Tigers led the Eagles 8-7 by the end of the first quarter.

“In the first half, the team’s body language just wasn’t there. We couldn’t get going offensively,” Holmes said. “Overall, we started slow offensively. The defense kept us in the game.

Then the Class 2A Eagles responded by scoring a touchdown in the second quarter to take a 14-8 lead into halftime. They would outscore the Tigers 15-8 in the third quarter to take what should have been a commanding 29-16 lead into the fourth quarter.

That’s when Jefferson County’s defense came up with some big stops and some even bigger plays to turn the momentum in the Tigers’ favor.

“Two of the biggest plays on defense were made by (senior cornerback) Eldrin Brown. He had two big-time interceptions,” Holmes said. “The defense made some big plays late in the game. This game showed that you never give up because you never know what the end is going to be.”

Jefferson County’s offense was led on the ground by JJ Claiborne, who had 13 carries for 70 yards with one touchdown and two 2-point conversions. And while Watson struggled for much of the game, he came through with what Holmes described as “a big-time throw in the fourth quarter,” referring to his TD pass to Galtney.

“He (Watson) had a rough night, but he had the game-winning touchdown,” Holmes said.

Now Jefferson County (3-1) must turn its attention and its focus to the undefeated Hazlehurst High School Indians in a match-up of former longtime Region 7-3A opponents. Hazlehurst, which is currently in Region 6-3A, improved to 4-0 after ruining Natchez High’s homecoming game with a 24-6 win over the Class 5A Bulldogs last Friday night.

“They’re very physical. But we’re also physical. I think this will be a great test for us this week” Holmes said. “But if we do all the things that we’re supposed to do right, I think we can come out with the win.”

Holmes added that in order for the Tigers pull off the upset at home over the Indians, they will have to eliminate the penalties and the “self-inflicted wounds.”

Holmes said that he would like to see a more up-tempo style of practice this week and that he wants everybody to pay attention to details. Kickoff between Hazlehurst and Jefferson County is set for 7:30 p.m.