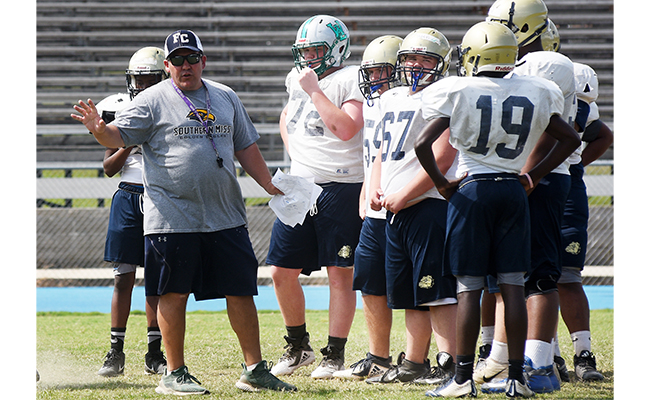 MEADVILLE — The Franklin County High School Bulldogs bounced back from a tough loss at North Pike High School with a 19-7 win at home over the Richland High School Rangers last Friday night to improve to 3-1 on the season.

Defense was the key to Franklin County’s victory. Even though the MHSAA Class 3A Bulldogs were facing a Class 4A team for the second straight week, they were ready for anything that Richland’s offense threw at them.

Franklin County head coach BJ Smithhart said getting out to an early lead is what keyed the Bulldogs to victory.

“Getting out ahead early and kind of sustaining that,” Smithhart said.

The Bulldogs held the Rangers to just 121 yards of total offense and forced four turnovers. Jailon Brown led Franklin County with nine tackles while Reshon Baker had himself a game with five tackles, two interceptions, and one fumble recovery. In addition to having 11 carries for 64 yards to lead its ground game, Keyundre Felton had four tackles, and one fumble recovery.

Moore scored on a two-yard touchdown run with 2:43 to go in the first quarter. Dallas Broom’s extra point gave the Bulldogs a 7-0 lead.

Then in the second quarter, quarterback Quez Rancifer hooked up with Moore on touchdown passes of 18 and 31 yards to expand the Bulldogs’ lead to 19-0 come halftime. Ranicer completed eight of 18 passes for 140 yards with the two TDs as well as two interceptions. Moore finished with six receptions for 114 yards.

Rancifer, who Smithhart said became the starting QB for Franklin County midway through the 2021 season, is getting better each and every week.

“Offense is coming along pretty well passing the ball,” Smithhart said. “Some of those interceptions (this season), they weren’t his fault. Some of them were. That’s part of it. But he can throw the ball pretty well.”

Next up for Franklin County is a home game against longtime rival Amite County High School. Kickoff between the Class 2A Trojans and the Bulldogs this Friday is set for 7:30 p.m.

The Trojans fell to 0-3 overall after a 27-13 setback at Perry Central High School. This will be the second of four straight road games for the Trojans.

Even though Amite County is winless so far this season, Smithhart knows that his Franklin County team cannot take the Trojans lightly. He said their speed is what concerns him the most.

Smithhart added that the Trojans have defeated the Bulldogs in two of the last three meetings, including a 34-28 victory at Amite County last year, so he looks for his team to get after them.