NATCHEZ — Adams County Volunteer Firefighters have received a $96,714.28 grant from the Federal Emergency Management Agency, which is part of the Department of Homeland Security.

The Adams County Board of Supervisors learned about the success of the grant application at its Monday morning meeting. 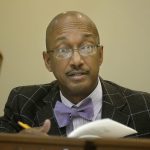 Other business at Monday’s meeting included:

• awarding contracts for supplies for the county from a variety of low bidders.

• the supervisors taking under advisement the purchase of a 2007 bucket truck for emergency management for $73,000.

• approving travel for Robert Bradford and Connie Mason from the Emergency Management to Biloxi on Oct. 24 through 28 for a 911 conference.

• approving the hiring of a part-time employee for the Adams County Road Department.

• approving allowing Robbie Dollar, management of the Miss-Lou Road Commission to sign up for the Job Fair being held Thursday, Sept. 29, at the Natchez Convention Center from 9 a.m. to 1 p.m. The Mississippi Department of Employment Security and Southcentral Mississippi Works Workforce Development are sponsoring the job fair. The county’s road department has a number of vacant positions and Dollar said those in the job market may not know about the excellent benefits and retirement offered by the county.

• Dollar thanking the board of supervisors for the two trucks his department received recently. The trucks replaced one that was totaled and another that does not operate.

• approving the hiring of a new jailer at the rate of $13.23 for the Adams County Sheriff’s Office. County Administrator Angie King complained that starting salary for new employees should be $12.60. However, Sheriff’s Deputy Billy Neely pointed out the jail is down three jailers and the pay rate will not put the department over its budget. Further, Neely suggested the increased rate was offered because of the employee’s experience and was necessary to secure the employee.

He urged more communication between department heads and King.

• the county’s health insurance agent, Fred Parker of Byrne Insurance, encouraged supervisors and county officials to urge county employees to take advantage of their wellness benefits. He said only 30 percent of the county’s employees are taking advantage of those benefits, which cover routine tests like mammograms, colonoscopies and check ups.

“In a group this size, with only 30 percent taking advantage of their wellness benefits in the last two years, somebody’s got something,” they need to know about and be treated for, Parker said.

• District 4 Supervisor Ricky Gray urging county attorney Scott Slover and other supervisors to hold a neighborhood meeting to explain the work that will be done on Morgantown Road soon, as well as hold a public hearing to get input on how the county’s American Rescue Act funds should be spent.

Gray also complained about treatment he receives from stories in The Natchez Democrat. He said someone recently spoke at a county board meeting and The Democrat reported what was said without verifying that it was true. Gray said it was not true.

“I have never been a favorite of The Democrat,” Gray said. “Instead of reporting anything and everything people say (in a public meeting) they should do some investigative reporting to see if it is true.”