‘No mother should have to be ordered to protect her children’: Mother of murdered 4-year-old sentenced to 8 years for two counts felony child neglect 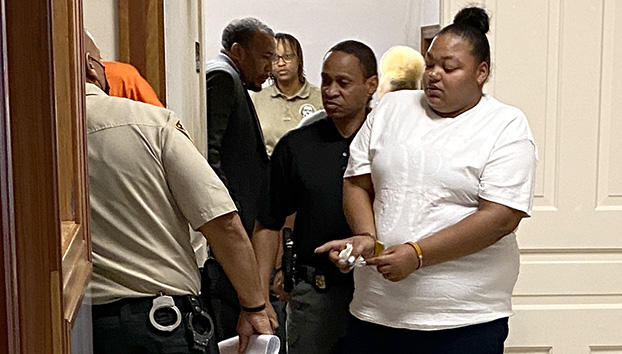 LaKeisha Jones, dressed in white, is led out of the courtroom after her sentencing Tuesday morning. (Jan Griffey | The Natchez Democrat)

NATCHEZ — The mother of 4-year-old Armani Hill, who was beaten to death on June 5, 2019, and who medical experts testified suffered a litany of abuse over time, was sentenced to eight years in prison on Tuesday morning.

LaKeisha Jones, 29, was set to go to trial on Wednesday on two counts of felony child neglect — one representing Armani Hill and the other Jones’ 3-year-old daughter Lailah Hill, who survived the abuse. Instead, Jones chose to plead guilty. Each count carried a maximum of five years in prison.

Circuit Court Judge Lillie Blackmon Sanders sentenced Jones to five years on count one and three years on count two, saying the only reason Jones didn’t get the maximum on each count was that she pleaded guilty.

Sanders said the sentences on each count should run consecutively, meaning one after another, rather than at the same time.

“I haven’t heard anything this morning that would make me understand how this could have happened. In fact, I don’t know who abused these children,” Sanders said. “This is the worst case I’ve seen.”

On Sept. 9, Jones’ boyfriend, James Christopher Anderson, 27, was convicted of child homicide and felony child abuse and was sentenced by Sanders to 20 years for child homicide for Armani Hill and 20 years for felony child abuse of Lailah Hill, who spent at least two weeks in Batson Children’s Hospital in Jackson recovering from her abuse. Sanders ordered those sentences to run concurrently, meaning at the same time.

After Jones’ guilty plea and before her sentencing, Sanders asked Jones about the abuse. The woman denied knowing it was taking place.

“In January 2019, DHS said he (Anderson) was putting hands on them,” Jones told the judge.

“I’m not talking about DHS. They did nothing. I would sentence them, too, if I could,” Sanders said.

Sanders told Jones it was her opportunity before she was sentenced to try to explain what happened. “You better sing like a canary.”

Jones said she did not.

“Did you give her a bath?” Sanders asked.

Jones replied that she did, but denied ever seeing any signs of abuse.

“Why did you leave the house when you knew your baby was sick?” Sanders asked.

“It was a disagreement that happened about me and him. It was not just the dog,” Jones said.

“I didn’t do what I was supposed to do when I was told about this,” Jones replied.

“She has completed parenting classes and realizes she should have been there for her children,” Chandler said.

She said Jones has no past felony criminal history and that she was employed. Jones has been working at the Super 8 Hotel.

“In all my years prosecuting cases, this is the most emotional one I have had. Here, a 3-year-old and a 4-year-old were beaten over time. A parent’s job is to nurture a child,” Collins said. “At 3 and 4 years old, that child depends on mama. She did nothing to protect those children. The therapy and the parenting classes, the court ordered those classes. No mother should have to be ordered to protect her children. Truth is, I feel she did some of the abuse.”

Collins asked Sanders to sentence Jones to the maximum possible time in prison.

The case was one that shook law enforcement officers, paramedics and medical personnel at Merit Health Natchez. Two caseworkers and a supervisor at the Mississippi Department of Child Protective Services lost their jobs after an investigation into Armani Hill’s death and Lailah Hill’s abuse.