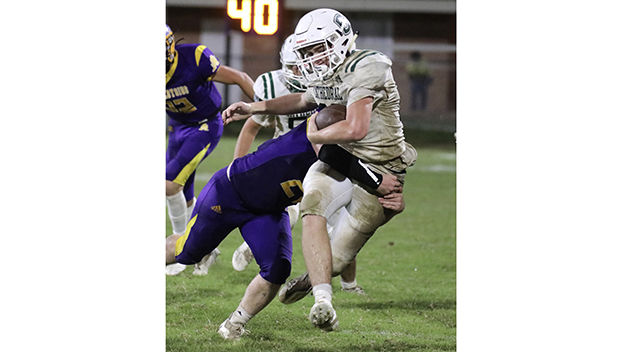 Jake Harriston rushes the ball against the Flashes last season in a 28-27 loss. Cathedral looks to avenge the defeat in this year’s Holy War. (Jody Upton | Cathedral Athletics)

Kickoff between the MAIS Class 4A St. Aloysius Flashes (1-4) and the Cathedral Green Wave (2-3) at D’Evereaux Stadium in set for 7 p.m. Even though St. Aloysius is on a four-game losing streak and Cathedral has struggled at times on each side of the ball this season, you can throw out the records between these longtime Catholic School rivals.

“They defeated Park Place Christian, but the MAIS washed that win because Park Place Christian didn’t have enough players,” Cathedral head coach Chuck Darbonne said. “But they did win on the field 12-0. That’s what they want you to believe. They do have one win.”

Cathedral senior quarterback Noah Russ had his best game of the season last week, throwing six touchdown passes, three of them to Jordan Henry and two of them to Kaden Batieste. But on a couple of occasions, the Green Wave offense bogged down and that almost allowed Pisgah to get back in the game.

Meanwhile, St. Aloysius gave Adams County Christian School all it could handle for the first quarter and a half last week in the Rebels’ homecoming game, but ACCS scored 16 points in a span of less than a minute that halted any chances of an upset by the Flashes. The Rebels went on to win that game 37-8 to remain undefeated.

“I believe their coaches will have their players ready for this big rivalry game. They’ll have them amped up and prepared mentally for us,” Darbonne said. “We have to do a better job coaching-wise to get our players ready and fuel our players’ fire.”

Especially after what happened in Week 6 of the 2021 season. Cathedral entered the game at St. Aloysius on a three-game winning streak and had a good week of practice. However, the Flashes pulled off the upset, defeating the Green Wave 28-27.

“Last year they were in a similar situation. We could have played better last year,” Darbonne said. “They came out spirited and had a very good game plan. They were able to pull one out late.”

As for what the main thing is that the Green Wave is focusing on this week in practice, Darbonne said, “We want to show improvement from week to week. After watching game film, we want to be able to correct the mistakes from last Friday night and see those improvements the next Friday night.”

Darbonne added that the players are spirited and excited after last week’s road win over the Dragons and ready to avenge last year’s lost to the Flashes.

“We had a lot of guys have really good games (last week). Just going through the gauntlet of the schedule so far. Getting a win raised the level of excitement for our players,” he said.

The Green Wave will need to clean up the little things that hurt them at times last week if they are to defeat the Flashes, notch their second straight victory, and get to the .500 mark overall on the 2022 season.

“Alignment on defense. Not aligning in the correct gap. Just a few mental mistakes here and there. Just execution as a whole, especially offensively,” Darbonne said.

Darbonne noted that so far this week, he reminded his players of what happened last year in their one-point loss to St. Aloysius.