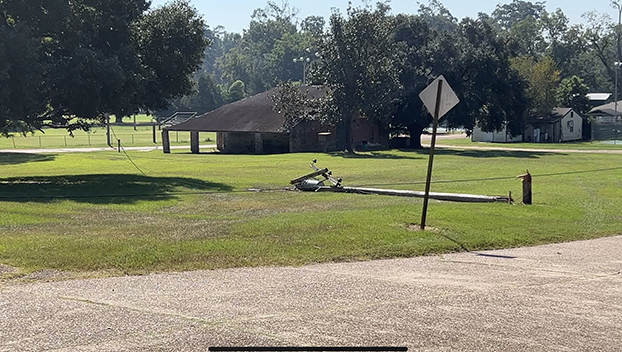 A utility pole snapped as a truck became hung up on a power line attached to it Wednesday morning in Duncan Park. (Submitted Photo)

NATCHEZ —Power has been cut off to some Natchez residents near Duncan Park, but the good news is new playground equipment has just arrived there.

The truck delivering the new equipment was tangled in a live, low-hanging power line at Duncan Park and Entergy had to shut off the power to make it safe for workers, said Parks and Recreation Director Sanora Cole at the park on Wednesday morning.

No one was hurt, however, the utility pole snapped when the power line hooked around the truck as it was backing into the park. According to Entergy’s website, 22 customers lost power just after 10 a.m. this morning at the time of the incident. The estimated time to have their power restored is noon.

The new equipment is also expected to be unloaded and installed today when it is safe to do so.

Dustin Hinkle, communications director for the city of Natchez, said new playground equipment would be delivered today at both Duncan Park and Osceola Park with more expected soon.

This story will be updated with more information.