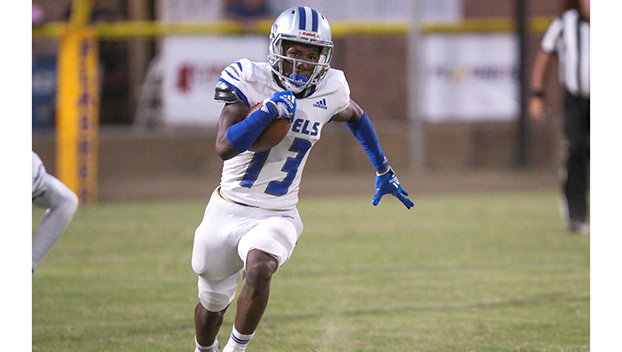 AC’s Adrian Walker runs away from St. Al defenders last week. The running back will look to make a mark on the Rebels game against Parklane this Friday. (Walter Fraizer | The Vicksburg Post)

NATCHEZ — Adams County Christian School’s varsity football team will have its hands full Friday night at Bobby Marks Stadium when MAIS Class 4A Rebels welcome Parklane Academy for a battle with the Class 6A Pioneers.

Kickoff between Parklane (4-1) and ACCS (5-0) is set for 7 p.m. The Pioneers, led by first-year head coach and former Cathedral head coach Ron Rushing, lost their first game of the season last Friday night at Jackson Preparatory School 34-14. That was the first game Parklane had given up more than seven points this season.

The Rebels are coming off a 37-8 homecoming win over St. Aloysius High School in which they got off to a slow start offensively before coming alive midway through the second quarter. After a sluggish start, sophomore quarterback Coleman Carter would throw four touchdown passes and completed 15 of 23 passes for 249 yards. Dantavios Stampley led the defense with one sack and one fumble recovery while Colton Rabb had one interception.

NATCHEZ — The Natchez High School Bulldogs will be looking to end a surprising two-game losing streak when they host the reeling Hattiesburg High School Tigers in the MHSAA Region 3-5A opener for both teams Friday night.

Kickoff between Hattiesburg (0-4) and Natchez High (2-2) at Tom F. Williams Memorial Stadium in scheduled for 7:30 p.m. The Tigers are coming off a 31-6 loss at Meridian High School last Friday night and this will be their third straight road game.

The Bulldogs are looking to rebound after an embarrassing 24-6 homecoming loss to the still-undefeated and Class 3A Hazlehurst High School Indians. Natchez High forced a turnover and scored on its opening possession to take a 6-0 lead, but it was all Hazlehurst after that. Four turnovers did not do the home team any favors.

FERRIDAY — The Ferriday High School Trojans are still seeking their first win of the season and they welcome the Madison Parish High School Jaguars to Melz Field for homecoming in the LHSAA District 2-2A opener for both teams Friday with kickoff slated for 7 p.m.

For the second straight week, Ferriday (0-3) came up oh so close to notching its first win of the season. This time it was at Class 3A Bastrop High School as the Rams held on for a wild 46-40 win over the Trojans.

Madison Parish is 2-1 overall and is on a two-game winning streak after an easy 26-6 win on the road at Lafayette Renaissance Charter Academy.

RAYMOND — For the second straight week, the MAIS Class 2A Centreville Academy Tigers will face a team from Class 5A, this time on the road as they take on the Central Hinds Academy Cougars and in the process will try to snap a two-game losing skid.

Kickoff between Centreville Academy (3-3) and Central Hinds Academy (2-2) in Raymond is slated for 7 p.m. The Tigers fell at home to Silliman Institute 36-22 while the Cougars lost at District 3-5A rival Riverfield Academy 28-6.

It will not be easy for Centreville to get back to its winning ways as Central Hinds is also looking to halt a two-game losing streak of its own and hosts the Tigers for homecoming.

WOODVILLE — The MAIS 8-Man Class 1A Wilkinson County Christian Academy Rams will look to get back in the winning column as they host the 8-Man Class 2A Porter’s Chapel Academy Eagles at 7 p.m. Friday.

WCCA (2-3) nearly came back to stun another Class 2A team in Newton County Academy on the road in Decatur, but the Generals scored two touchdowns in the fourth quarter to pull away for a 56-37 win over the Rams.

Porter’s Chapel (3-1) won its second straight game last Friday night by holding on for a 30-20 win on the road over the Ben’s Ford Christian School Eagles.