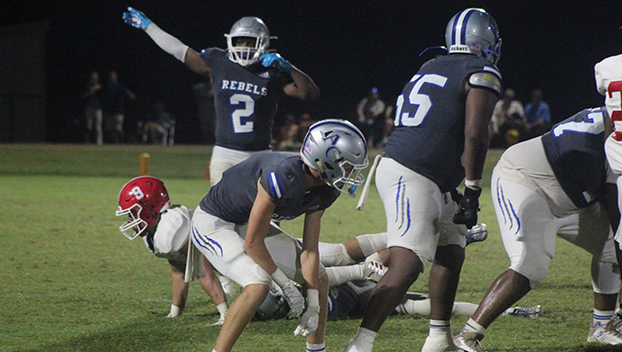 Carter took a cheap shot on fourth down as a Parklane Academy defender flew across the line of scrimmage before the ball was snapped. It gave AC a first down with about 15 seconds left and they kneeled out the clock. (Hunter Cloud | The Natchez Democrat)

NATCHEZ — Coleman Carter didn’t have his best game throwing the ball last Friday night against MAIS Class 6A Parklane Academy, but the sophomore quarterback for Adams County Christian School came through in the clutch.

Carter found a wide-open Adrian Walker on 4th-and-9 and the game still very much up in the air with 7:05 to go in the fourth quarter as the Class 4A ACCS Rebels held on for a wild 31-28 upset win over the Parklane Pioneers.

Even though he completed just six of 19 passes for 70 yards, Carter frustrated Parklane’s defense with his legs. Carter took a cheap shot on fourth down as a Parklane Academy defender flew across the line of scrimmage before the ball was snapped with 15 seconds left in the game. The penalty gave AC a first down and the Rebels kneeled out the clock for the win.

Carter led the Rebels’ ground game with 15 carries for 106 yards, including a one-yard touchdown run with 2:43 to go in the first quarter that gave them a 15-7 lead.

Terrell Tenner had 11 carries for 46 yards, including a four-yard TD run at the 4:41 mark of the first quarter. Carter’s two-point conversion run gave ACCS an 8-7 lead.

ACCS would increase its lead to 17-7, but it had nothing to do with offense or defense. Instead, when Parklane (4-2) attempted to punt from deep in its own territory, the snap went over the punter’s head and through the back of the end zone for a safety with 1:04 left in the opening quarter.

The only scoring of the second quarter was a 17-yard TD run by the Pioneers’ Conner Putfark with 9:35 left until halftime. That made it 17-14 in favor of the Rebels. Tenner’s second touchdown of the night was on a five-yard run with 4:36 left in the third quarter for a 24-14 advantage.

Parklane quarterback Amarien Jefferson, who threw 194 yards on 12-of-23 passing, threw a 23-yard TD pass to Brent Fleming less than a minute into the fourth quarter to make it a 24-21 game.

After Carter’s TD pass to Walker, the Pioneers struck back quickly. Jefferson scored on a five-yard run with 5:17 to go to make it a 31-28 ball game. Their last gasp ended on an interception by Dantavios Stampley, who also had a team-leading nine tackles. Jordan Berry also had an interception.

ACCS (6-0) travels to Clinton, La. to take on Class 5A Silliman Institute next Friday at 7 p.m.