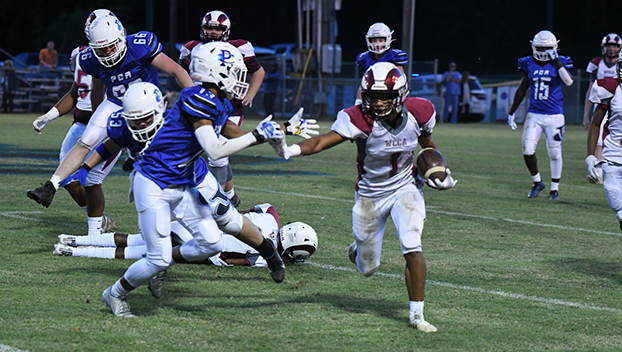 Fisher had 17 carries for 147 yards and two touchdowns to go with two receptions for 75 yards and two scores. From his linebacker position, he finished with a team-leading 10 tackles. His touchdown runs of 22 and 36 yards propelled WCCA to a 14-0 lead midway through the first quarter.

Each team Porter’s Chapel (3-2) would try to get back in the game from that point through the third quarter, the Rams would have a response. John Wyatt Massey connected with Thomas Azlin on a 22-yard TD pass late in the first quarter to make it a 14-8 game.

Sophomore quarterback Jacob Sessions hooked up with Fisher on a 63-yard TD pass with 1:14 to go until halftime and Jack Orgeron added the two-point conversion run to give the Rams a 22-8 halftime lead.

The Eagles answered on a 27-yard scoring strike from Massey to Zach Ashley with 8:09 left in the third quarter, but Sessions scored on a six-yard run just over a minute later to give WCCA a 30-14 lead at the end of the quarter.

Then Porter’s Chapel scored two touchdowns in just 36 seconds to make it a 30-26 game. Massey was responsible for both scores – a 55-yard TD pass to Ashley and a three-yard TD run at the 9:14 mark of the fourth quarter.

What made the final score closer than perhaps it should have been was that WCCA had three touchdowns called back due to penalties. The Rams were penalized 11 times for 107 yards.

Sessions went 3-for-5 passing for 80 yards and two touchdowns. Orgeron had eight tackles while Nathan Mudd and Brayden Ready each had seven tackles. Cannon Holland had three tackles and one interception.