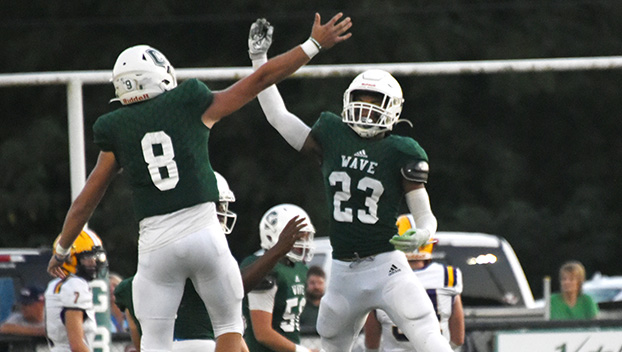 NATCHEZ — Cathedral (3-3) came out of the locker room with a ton of energy and maintained control of the game from the first series as they defeated rival St Aloysius 50-20 on Friday night.

Head Coach Chuck Darbonne opted to take the onside kick. Justin Hawkins made the recovery and then scored on a 37-yard touchdown pass a few plays later.

“We wanted it after last year we took a hard loss (28-27) we took it back. Got that W, for Jordan Herrington, too,” Hawkins said. “It was game over, all the momentum was on our side, it was time to take over. On the onside kick, I just saw the ball go up and it was all mine.”

St Aloysius needed a touchdown and they got one from Ahmad “AJ” Stewart who caught a screen from John David Liggett and eluded tacklers for 60 yards. His touchdown cut the deficit in half.

Liggett would connect again on a touchdown pass to Pardre’ Gray Jr to cut the lead in half, by then Cathedral led 28-14. Senior Gray said his 45-yard reception was special.

“The first touchdown made a difference at first and we built momentum off of one play. We came back and had a few mistakes, unfortunately it changed the game. It’s tough to recover from it,” Gray said. “My touchdown they sent me on a wheel route and it developed really well and Liggett saw me immediately and I’m glad we got it. It was my first touchdown this senior year.”

Cathedral did not give up a score for most of the second half. Its defense played strong and the blocking was improved from their last defeat to Parklane.

Batieste had said on the sidelines their game against Pisgah was good but Hawkins said this game was their best performance yet.

Defensive coordinator Wright Graning was pleased with his defensive effort, saying the players recovered after blowing an assignment early in the game.

“We played our assignments and the best we have played all year,” Graning said. “When we are in the right spot we make the play. Early on in the game I put them in the wrong spot. We fixed it.”

Darbonne was thrilled by the team’s performance. Jake Maples scored a rushing touchdown as did Paxton Johns. Tristan Fondren had an interception and Brycen Hughes had a 24 yard field goal.

He said the kids knew St Al’s record (0-6)  but weren’t sure how they would come out for the game and react. “We stayed on them and made our impact on the game,” Darbonne said. “We had great protection for Noah too. We made plays on defense to force punts early on. I thought it was an improvement.”

While line coach Kurt Russ was soaked to the bone from a Gatorade shower, St Al took one last shot. Gray caught a screen and made a play cutting across the field and dashing 52 yards for a score with 0 seconds left on the clock. It cut the loss to 50-20.

“That last play was something I’ve always been taught to do. Last year I had a play like that. I got stuck on one side of the field and I did my best with what I had,” Gray said. “Only thing in my mind was to not fall. I have a bad luck streak. I wanted to finish through.”

Cathedral takes on Copiah Academy in Gallman next week. Kickoff is at 7 pm.