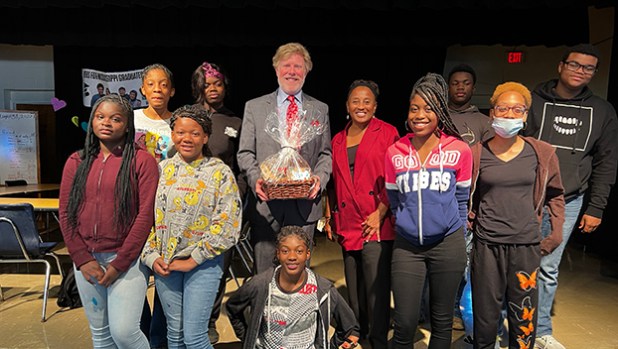 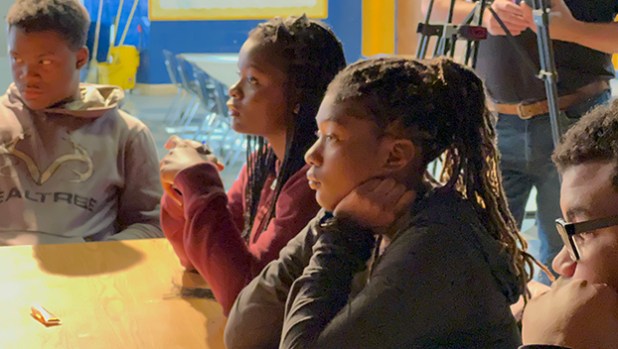 Ze’Mariyah Blunt, front, and Kyra Singleton, behind, listen as Gibson talks about why he wanted to be mayor. (Sabrina Robertson | The Natchez Democrat) 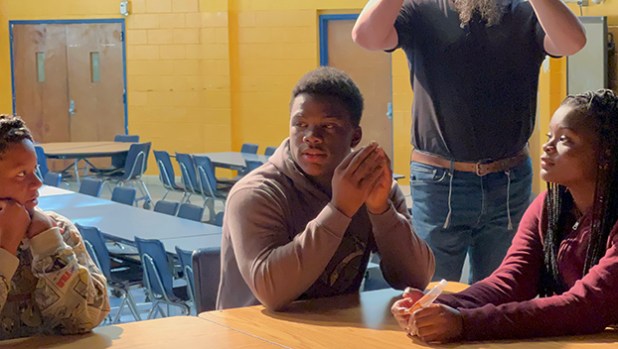 Jaden Rogers tells Gibson that he wants to be a welder when he graduates. (Sabrina Robertson | The Natchez Democrat) 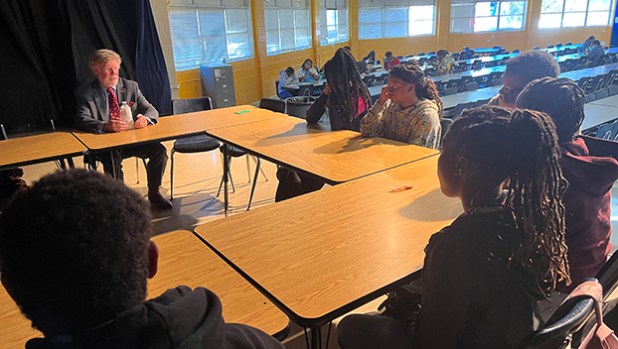 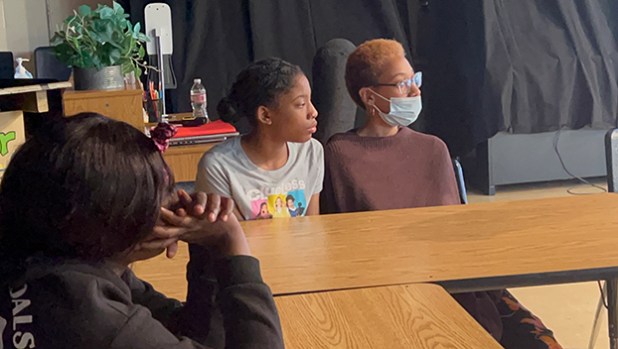 NATCHEZ — Kinsley Allen, a freshman, demonstrated one of the lessons she and her fellow classmates in the Jobs for Mississippi Graduates class learned so far this year. Standing straight, she walked with confidence to shake hands and introduce herself.

“Hello, my name is Kinsley Allen,” she said, remembering to smile. “I’m in the 9th grade at Natchez High School.”

Resume writing and how to dress and act for an interview are other lessons learned this year in Jobs for Mississippi Graduates, or JMG, said her classmate Sanya Oliver.

The students had a sit-down meeting with Natchez Mayor Dan Gibson on Wednesday as one of the class activities. In the coming weeks and months, they will also hear from business owners in the Miss-Lou and learn about different careers.

Oliver told Gibson she wants to be a lawyer when she grows up.

“Lawyers have to be alert and on top of things and I can tell you are paying attention,” he said.

Gibson turned to Kyriona Coach, who told him that she wants to be a cosmetologist.

“And I can tell you take good care of your appearance,” he said. “Each and every one of you is unique.”

Kyra Singleton, president of JMG at Natchez High School, asked why Gibson chose to be mayor over any other job.

Gibson said that decision didn’t come easily. He wanted to be a lot of things before becoming mayor. He studied architecture and worked as an insurance agent and a real estate agent. Singleton said she also wants to work in real estate when she finishes school.

Gibson said in his younger days he wanted to become a concert pianist and learned how to play the piano. Gibson said he was in 9th grade when he and his classmates when to Jackson and did an activity where they pretended to be legislators. That was when he first considered being a politician.

“It was a lot of fun,” he said. “If my experience is similar to yours, all of the things you want to do are starting to come forward.”

Gibson, in his early 30s, became one of the youngest mayors in Mississippi in Crystal Springs, giving him what he called “the big head.” He ran for Mississippi governor in 1999 and lost.

Gibson said he was on the fence about running for mayor of Natchez. Having lived in the city for about three years, he was afraid he would lose. Ultimately his wife, Marla, gave him the final push he needed.

“How many of you know someone that talks to you in a way that gets your attention?” Gibson said to the students.

Romiah Johnson immediately answered, “My grandmother and my mom.”

Gibson said he told Marla that he made up his mind, he wasn’t going to run and he felt good about it. She repeated, “And you feel good about it?” and became really quiet, he said.

“Do you know what she was doing, when she got really quiet?”

“She’s thinking. Like, she is about to tell you what is right but she is going to try and explain it in a way that you understand,” Johnson said.

Gibson said he learned he couldn’t let fear stop him from trying.

“You can’t be afraid of failure. You all heard about the time that I lost. Failure happens but then success happens, too,” he said.