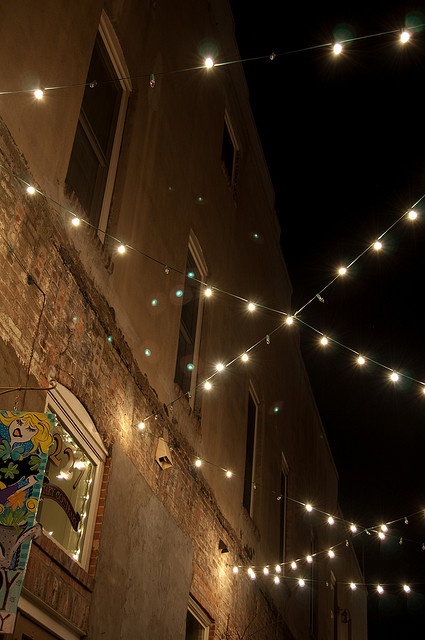 Here’s an example of criss-cross lighting many would like to see installed to light Locust Alley. (File)

The alley, between Main and Franklin streets, is in the city’s historic district. That means its approval is needed before any changes are made to buildings or the area surrounding them.

Beau DesHotel, who owns Arts District Studio at 107 N. Commerce St., and Jaki Robinson, a vice president at Home Bank in Natchez, applied to the preservation commission for approval of the lighting.

“They gave conceptual approval and will come back with more details, like how the lights,” said Frankie Legaux, Natchez city planner.

DesHotel said he and others involved in the project would return to the preservation committee soon with schematics and details, such as how the lights will attach to the buildings.

Plans are to add criss-crossing Italian street lights across the alley “all the way down,” he said.

“I own a business on Commerce Street and, like many people in Natchez, I thought, ‘What a beautiful alley to light up,’ ” DesHotel said. “So many people are involved in this project and want to see this happen. It’s not just me and Jaki.”

Monthly or weekly events like flea markets and antique booths, and perhaps outdoor seating all would benefit from aesthetic improvements in what is a main thoroughfare for pedestrians to get from Main Street to Franklin Street.

“It’s a place everyone could enjoy,” he said.

Robinson is equally excited about the prospects for Locust Alley.

“What I hope it will mean for the city is to bring the community together and form a bridge between Main and Franklin streets. People will be able to walk through this nice, well-lit area, and I hope we will have some markets and local artists for tourists and the community to enjoy,” she said.

Robinson and DesHotel plan to take the project before the Natchez Mayor and Board of Aldermen the first meeting in October, “and at that point we will take it back to the preservation commission for final approval,” she said.

The Mayor and Board of Aldermen’s first meeting in October is Oct. 11 at 6 p.m. in the Council Chambers.