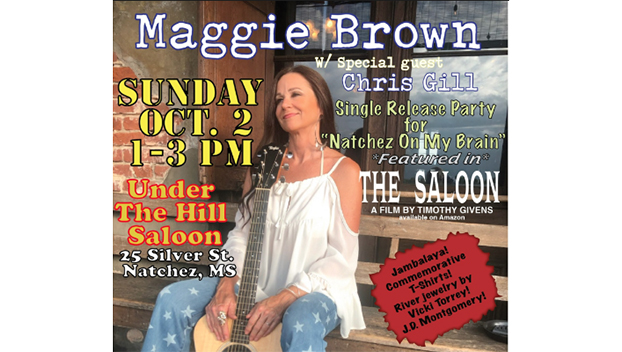 NATCHEZ —  This Sunday, local singer and songwriter Maggie Brown is releasing her single “Natchez Mississippi On My Brain.”

Brown said the public is invited to a single release party Sunday, from 1 to 3 pm at the Under the Hill Saloon in Natchez. The venue is the topic of an Amazon documentary that features the song, “The Saloon.”

Watch “The Saloon” trailer below.

Brown, who grew up in Ferriday, Louisiana, said she borrowed her brother’s guitar at age 12 and put together a band at 14. At age 16, she wrote her first song. After high school graduation, she left town on a 1969 silver eagle tour bus to pursue her dream. The Texas Music scene was rewarding-she began opening shows for the likes of Charlie Daniels, Tanya Tucker, Willie Nelson, and many others. In preparation for the future, she moved to Nashville to grow her talents and find a record label.
Brown returned to Natchez after the sudden death of her mother in 1988.

She has continued her career in her own way — mostly under the radar — writing and performing throughout the south. Her music has been described as country, blues or southern rock—authentic and honest regardless of what it’s called. Earthy vocal tones and haunting melodies envelop her life’s stories told through music.
In 2004, her debut album was released on the Riverwide Label established by her producer, Jeff Ford. That album is still available on streaming platforms. Her album won over critics and was played on Sirius Radio, Sonic Radio, and independent stations across the country and in Europe. Maggie opened shows for Delbert McClinton while promoting the project.

Like many of her songs, Brown says “Natchez On My Brain” was inspired by a true story.

In 2019, on her daily walk to the river from her home in downtown Natchez, she spotted something on the sidewalk, someone’s “drawers” as described in the song’s opening lyrics.

“The song wrote itself,” Brown said. “The duality of Natchez, the local characters, and the River all came together to form ‘Natchez On My Brain.’”

After playing the song with her band and at solo gigs, a documentary producer heard it and asked to include it in his project. Tim Given’s “The Saloon” documentary can be streamed now on Amazon Prime.
The new single will be available to purchase on Sunday, Oct. 2.

Brown said the public is invited to her release party from 1 to 3 p.m. on that day at the Under the Hill Saloon, where there will be food, commemorative t-shirts, river-themed jewelry by Vicki Torrey and music by Chris Gill of the Sole Shakers from Jackson.

“I’m just proud to be a product of Natchez for the last 30 years and want to invite the public and let them know the song will be available to stream on Oct 2.,” Brown said.

Listed below are the contributors to “Natchez On My Brain”