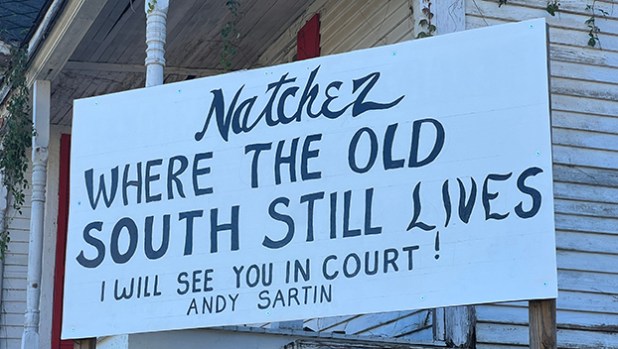 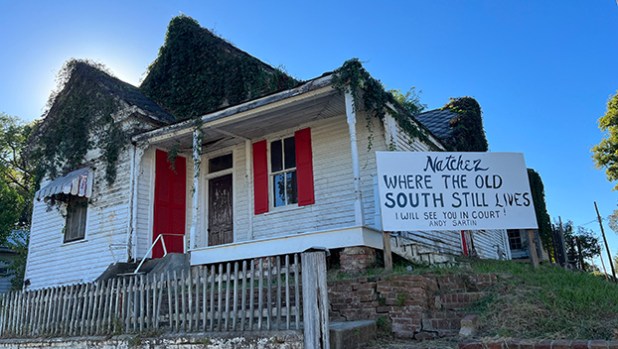 A new sign appeared Tuesday in front of the house at 416 N. Rankin St., once the home of a famous Natchez madam and now the subject of concern over its dilapidated condition.

The sign seems to have been painted over or replaced a sign erected in 2021 by property owner JT Robinson. That sign said “Nellie Jackson’s House restoration beginning; Please, no trespassing. Police enforced.”

Robinson first started taking steps in 2019 to restore the house which had been home to Jackson’s brothel. He has said goal is to reopen Nellie’s as a tourist attraction, a bed and breakfast or possibly a museum honoring its original owner, whose business was legendary throughout the South until she died when a disgruntled man set fire to the home. In a recent interview, Robinson told The Natchez Democrat he put the original sign there to deter vandals and “inspire” the Natchez community so that they would know, “Nellie’s is not lost.”

Last week, the house became the topic of discussion at a Natchez Preservation Commission meeting when chairman Sartin moved to have the property added to an “adjudication list.”

Robinson was attending the meeting for another matter but was asked to speak about his plans and progress on restoring the Rankin Street property. Robinson was warned that if he allows the house to deteriorate further, he could face a “demolition-by-neglect” process, which puts property owners on notice that they must reverse the dilapidation of their properties or else the city can file misdemeanor charges and impose fines.

Robinson told The Democrat he was caught off-guard at a preservation commission meeting and had recently made efforts to replace the front porch, add new columns and restore electricity to the house.

Efforts to reach Robinson and members of the Preservation Commission were unsuccessful Tuesday evening.

This is developing story and will be updated as more information is made available.