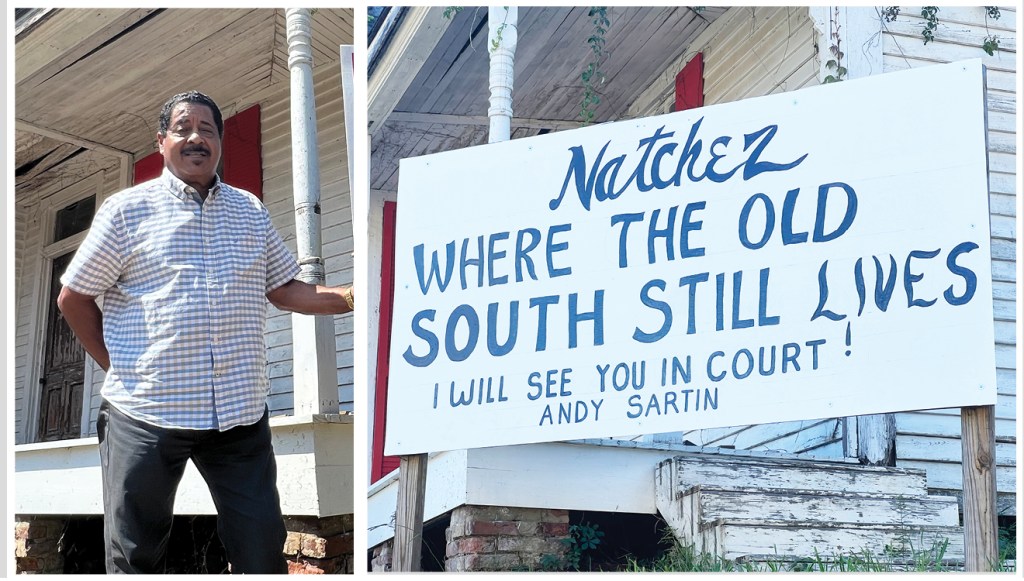 JT Robinson, left, as placed signs aimed at the Natchez Preservation Commission outside the former brothel on N. Rankin Street. One of the signs, right, threatens a lawsuit.

That was Andy Sartin’s reaction to be named on a sign threatening “I’ll see you in court” posted by the owner of a property that formerly housed a famous Natchez brothel.

Sartin, who chairs the Natchez Preservation Commission, said he meant no harm in questioning the condition of the property at 416 N. Rankin St. during the Sept. 14 meeting. During that meeting, Sartin shared concerns raised by the public about the property. Owner JT Robinson, who was in the audience, was asked to provide an impromptu update on restoration efforts.

Robinson said the commission’s actions at the meeting felt like “a slap in the face.” And this week Robinson replaced the sign in front of the property with one saying “Natchez, where the old South still lives; I will see you in court! Andy Sartin.”

Sartin said no formal motion was taken against Robinson at the meeting.

“I approached the board and said we needed to see if this particular property is being faced with demolition by neglect,” Sartin said. “I can’t make a motion because I chair the board. There was no formal action taken and therefore (Robinson) did not have to be notified.”

“You wouldn’t believe how many people call us,” Sartin said. “Several people came to me and said they were concerned about Nellie’s. Generally, someone reports it and it doesn’t have to come through the preservation commission.” He added any legal actions against homeowners would have to come before the Mayor and Board of Aldermen.

The next step would be to examine the structure to see if it is facing “demolition by neglect,” meaning the house is open to weather damage, Sartin said. If a house is found to be facing demolition by neglect, a notice would be issued to the owner that something should be done to reverse the demolition process, such as replacing the roof, walls, windows, doors or whatever is needed to enclose the structure and prevent further damage.

“It doesn’t force the owner to renovate it completely,” Sartin said. “All they would need to do is make it weather tight.”

Robinson said within the past few months he has restored electricity to the house for contractors to plug in their equipment and replaced the front porch and obtained estimates for replacing the roof. He purchased the property in 2019 and received the final deed in November 2021. He has plans to restore the house and open it as a tourist attraction, such as a bed and breakfast or a museum to its original owner. The house was home to Nellie Jackson, who ran a well-known brothel until she died in 1990 after a disgruntled patron doused her with gasoline and burned her.

Robinson said he is considering legal action against the commission.

“If I can’t get enough money to restore Nellie’s, I do have enough to get an attorney,” he said.