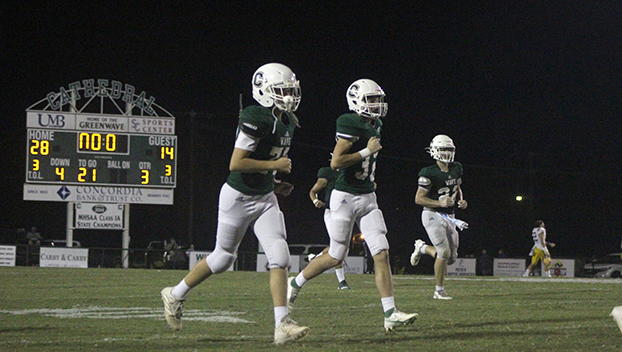 NATCHEZ — The Cathedral High School Green Wave will look to extend its winning streak to three games in a row, but it will have its hands full this Friday night when it travels to Gallman to take on the Copiah Academy Colonels in Cathedral’s MAIS District 3-5A opener.

Kickoff between Cathedral (3-3) and Copiah Academy (5-1) is slated for 7 p.m. While the Green Wave took care of rival St. Aloysius High School 50-20 at home last Friday night, the Colonels suffered their first loss of the season at Jackson Preparatory School 42-21.

The match-up to watch is the Green Wave’s offense against a stingy Colonels defense. Cathedral scored a total of 95 points in its last two games — a 45-20 win at Pisgah High School on Sept. 16 to go along with the 50 points last Friday night. Before last week’s loss to Jackson Prep, Copiah Academy had held four of its first five opponents to fewer than 10 points.

“Copiah’s a good team. They’re well-coached. They’re got good players. There’s a lot of team speed they have. We match up pretty good against them in several spots,” Cathedral head coach Chuck Darbonne said. “I don’t consider us an underdog in a lot of games. But’s going to be our toughest opponent of the season, including the 6A team (Parklane Academy).”

Darbonne said the Green Wave will be focusing on its execution in practice this week to get ready for a very good Colonels team.

“We have to be razor sharp on our assignments of offense and being really aggressive and great tacklers on defense. They have some great ball carriers that are great in the open field,” Darbonne said.

As to what concerns him the most about Copiah Academy on each side of the ball, Darbonne said, “Offensively, they do a good job of mixing the run and the pass. Their quarterback is a dual threat. It makes it hard on defense (to stop) the run and throw. For us, we really haven’t faced one like that, except the one from Parklane. He’s a physical runner and he’s a fast runner. It’s different to prepare for him than from the other guys we’ve faced this year.

“Defensively, just team speed. I would say on both sides of the ball, including their linemen on defense. They have a lot of team speed.”

Darbonne said the X-factors in this pivotal district game are which team wins the turnover battle and who executes better on offense and defense. And while this is the district opener for Cathedral, Copiah Academy already has a district win under its belt as the Colonels defeated Oak Forest Academy 13-8 on the road back on Friday, Sept. 9.

Darbonne said it’s going to take a team effort for the Green Wave to pull off the upset on the road Friday night and get a leg up in the district standings.

“On offense, we’ll have to take what the defense gives us. Our offensive line is going to have to have a big game in the passing game,” Darbonne said. “Defense, it comes down to winning up front. I would say the offensive and defensive lines would be key in us being successful.”