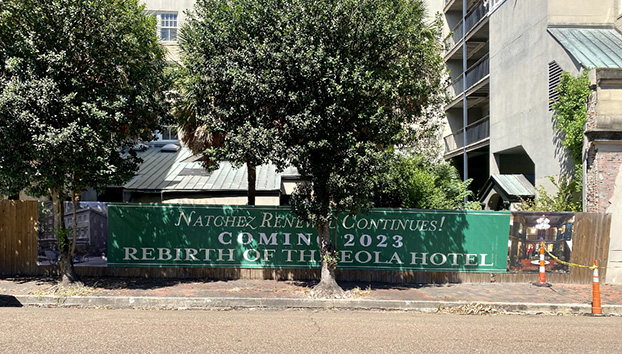 Mayor Dan Gibson said developers of the Eola Hotel project installed this banner at the Eola on Monday. (De'Nora Stewart | The Natchez Democrat)

NATCHEZ — A planned parking garage in downtown Natchez likely won’t happen, but much anticipated renovations on the Eola Hotel could begin next year if financing is solidified, according to the mayor.

Mayor Dan Gibson told the board of aldermen on Tuesday that plans to erect a parking garage at the site of the Fry Building have stalled.

“Very likely, we will not be entertaining a parking garage, but will be taking down the building and creating a very nice parking lot, similar to what was created for Loss Prevention and it will be for the sole use of the Eola Hotel,” Gibson said.

Gibson also said the developers of the Eola have agreed upon a $33 million budget for the project.

“That’s more than we expected and obviously it is going to be a large project,” Gibson said.

He said the city is now working with developers on a financing strategy.

“They have worked out most of the financing on their end, but they will seek a TIF (tax increment financing) bond financing, which will be paid for by the expected sales taxes.”

He said the Eola project is moving forward and that construction may begin in the first quarter of 2023. “The developers obviously feel so good about it that they put up a banner today,” Gibson said, referring to a sign which appeared on the Pearl Street side of the hotel Wednesday.

The green banner, which stretches more than 20 feet along the sidewalk bordered by construction cones and caution tape, proclaims “Natchez Renewal Continues! Coming 2023 … Rebirth of The Eola Hotel.”

The Natchez Board of Aldermen voted to apply for a 2023 EPA Brownfields Clean Up grant to help with the demolition of the Fry Building.

The Fry family donated the building to the city in an effort to help with the redevelopment of the Eola Hotel.

The mayor asked the aldermen to keep the project in their prayers.

“There’s noting wrong with prayer, but we’ve been let down and hurt so many times, I’m going to take a wait and see attitude. I don’t want to get my hopes up too high,” said Alderman Billie Joe Frazier.