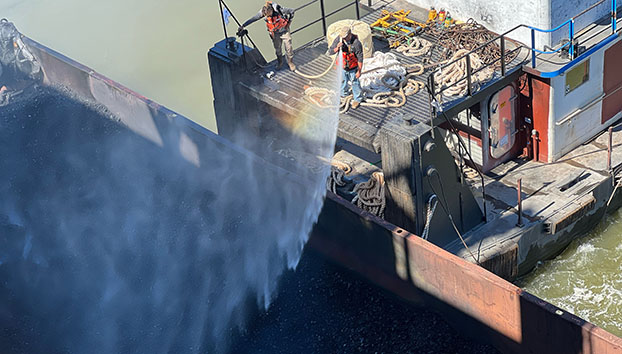 NATCHEZ — Natchez Fire Chief Robert Arrington said “spontaneous combustion” was probably the cause of a barge fire on Thursday morning at the Natchez-Adams County Port.

The fire sent billows of black smoke into the air visible from miles away at approximately 11 a.m. Thursday. Within an hour of that time, the fire was contained.

The barge is mostly metal and wasn’t hurt by the fire, mostly it was just the material inside of it, he said. Workers continued to dump water throughout the barge to keep it from reigniting.

“Right now we’re still looking into what may have caused it to ignite, but it’s likely that it was spontaneous combustion,” he said.

The barge, which was docked and unoccupied at the port, carried rubber material, mostly from shredded tires, Arrington said. When left packed tightly and sitting for long periods of time, the tire rubber can create enough heat to cause a fire, he said.

“Typically, you have to keep that kind of material moving,” he said, adding the barge may have been sitting at the port for several weeks.

“Their barge driver noticed it and notified the port commission and they immediately started applying water. That was the best thing they could’ve done. Everything is contained and under control. I really want to send a big thank you to Terral and the port commission. There wouldn’t have been much we could do if this was allowed to get really bad.”