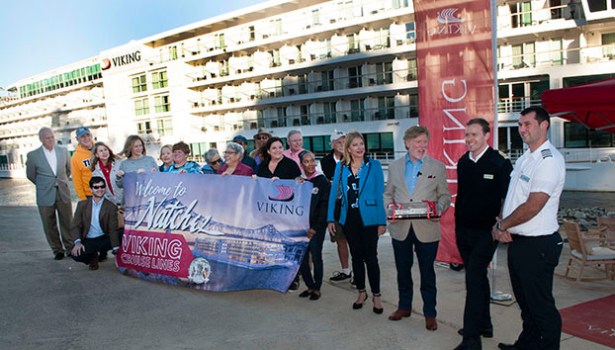 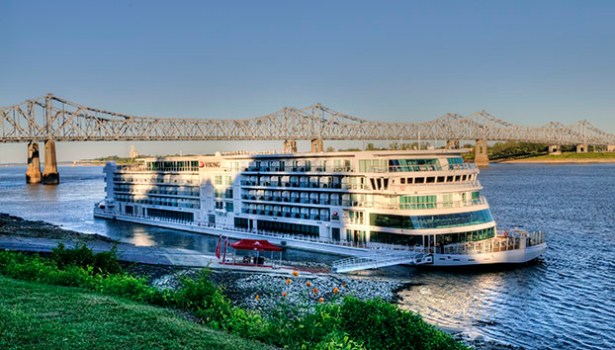 The Viking MIssissippi docked for the first time in Natchez on Thursday morning. (John Larson | The Natchez Democrat) 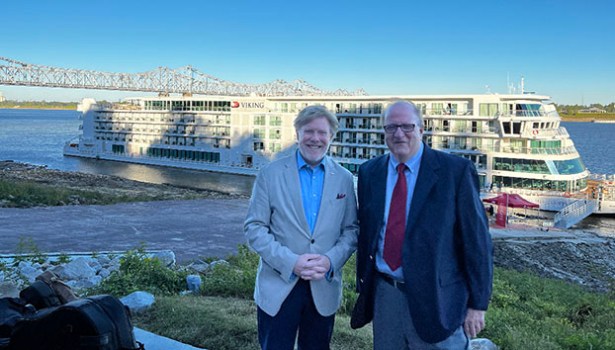 Because of a tight schedule, the welcome was a brief one. A more official and celebratory welcome will be planned for later when time allows.

David Simmons with Viking greeted Natchez Mayor Dan Gibson at the top of the Ferry Street Landing Under the Hill, where the Viking Mississippi and its nearly 250 passengers and crew arrived to a steep climb up the dock because of the low river stage.

“We have been dealing with the low water levels all the way down the Mississippi,” Simmons said.

Viking Mississippi’s captain presented Natchez Mayor Dan Gibson with a model replica of the riverboat, which Gibson said would be displayed in City Hall.

Viking arrived in Natchez early this morning on its way down the river from Vicksburg, where it docked on arrived early Wednesday morning. The vessel began it voyage in St. Paul, Minnesota, and will end its cruise in New Orleans.

Established in 1997 by a Scandinavian and Dutch consortium, Viking Cruises is a global corporation headquartered in the United States with its main operational headquarters in Basel, Switzerland.

The company currently offers cruises along rivers in Europe, Russia, China, Southeast Asia and Egypt, and in 2013 began ocean cruises. Its river cruise division is the world’s largest river cruise line, according to the company.

Because of rising construction costs, a project to raise Silver Street and provide a dock for Viking as well as American Cruise Lines has been delayed, but the city hopes to complete that project some time in 2023.