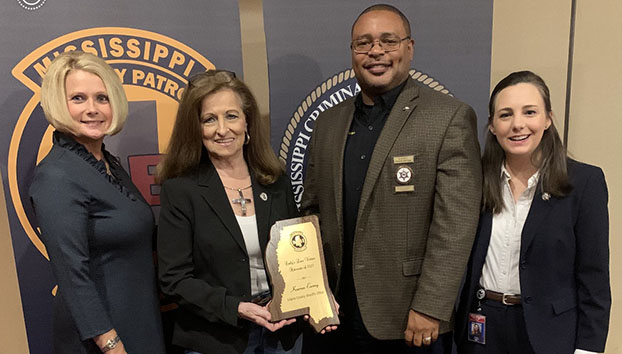 Mississippi Statute 45-33-63, also known as Carly’s Law in honor of a sexual abuse victim, protects victims of sex offenders from future contact with an offender and helps prevent future trauma.

“The award is designed to recognize an individual who has had a distinguished career as a victim advocate in law enforcement, making significant contributions to the protection of public safety and the administration of justice, and whose career exemplifies the highest standards of dedication and commitment to the profession,” the award reads.

“Deputy Ewing has demonstrated outstanding and exceptional performance in the curse of her work for the Adams County Sheriff’s Office. From human victims to animal victims, she protects and serves all she comes in contact with. She is quoted as saying, ‘Happy victims have always been very important to me and also was really helpful therapy for me at the time,’ ” said Megan Costilow, director of the Mississippi Sex Offender Registry. “In her role as an advocate and as a sex offender coordinator, Deputy Ewing consistently goes above and beyond to advocate on behalf of the victim and has encompassed the true meaning of advocacy at every level of support.”

“Karren Ewing is a special individual to the sheriff’s office and to myself. She is one of the hardest working people that we have at the sheriff’s office,” Patten said. “Considering she was the victim of an extremely violent crime in 1995 herself, she has done an exceptional job as a victim’s advocate. I am extremely proud that someone who has been a victim has turned around and received the first-ever state award for helping the victims of violent crimes.

“I’m even more proud that she works and gives her all not only to the sheriff’s office but this entire community. Thank you, Karren Ewing. Your work has spoken for you,” Patten said.

Because of the symposium, Ewing was unavailable Friday afternoon for comment on her award.