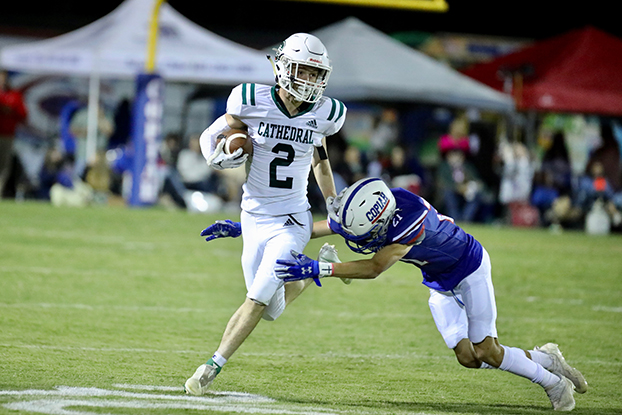 Cathedral tried to do something differently on offense to throw Copiah Academy’s defense off. And while the Green Wave was able to get a few first downs, they were not able to punch the ball across the goal line.

The Colonels made them pay as Albright connected with senior wide receiver Tanner Hollingsworth on touchdown passes of 28 and 46 yards to give them a 14-0 lead.

“When they got the ball offensively, we couldn’t tackle very well at all the whole game. When their wide receivers and quarterback got in space, they made us pay for the missed tackles with touchdowns.”

Once again, Cathedral’s defense couldn’t get Copiah Academy’s receivers, running backs, and quarterback down to the ground as the second quarter went on and the Colonels made the Green Wave pay.

Albright had touchdown runs of 65 and 10 yards while Jake Ainsworth scored on a 10-yard run in the final 6:56 of the first half to take a 42-6 lead into halftime. Which meant a running clock was used in the second half.

The only score after halftime was on a 56-yard touchdown pass from Russ to Kaden Batieste with 6:38 left in the third quarter. The Colonels went with their second- and third-string players the entire second half.

“Once we went to more of a traditional offense with Noah at quarterback, we were able to score a touchdown. But bad tackling came back again and cost us,” Darbonne said. “For us to get better as a team, we need to tackle better. And I need to do a better job of getting our guys ready to execute offensively.”

Darbonne added that the Colonels did a good job of mixing the run and the pass throughout the first half.

“Copiah is a very good team. Very talented skill players. They’re very aggressive up front, on both sides of the ball,” Darbonne said. “I would consider them one of the top teams in 5A, if not the top.”

Cathedral (3-4, 0-1) plays host to Central Hinds Academy in a pivotal district showdown next Friday at 7 p.m.