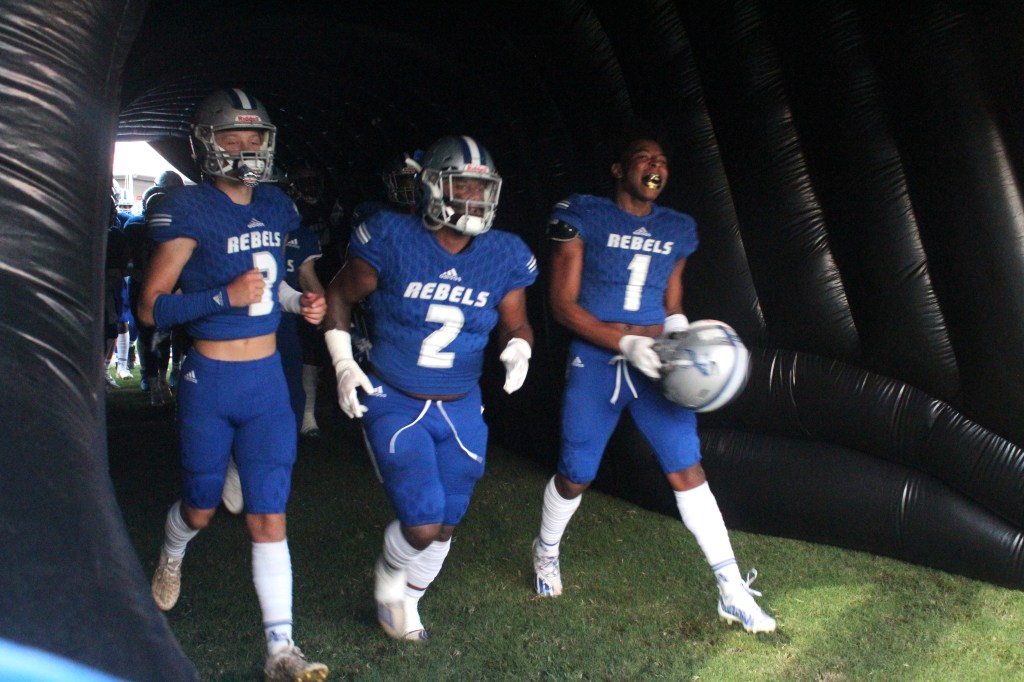 Adams County Christian School football players from left, Conor Aplin, Terrell Tenner and Dantavious Stampley prepare to run out the ACCS tunnel. The Rebels will host Riverfield this Friday in the second round of the MAIS playoffs with kickoff set for 7 p.m. (Hunter Cloud | The Natchez Democrat)

Silliman was looking for a signature win outside of MAIS District 3-5A in its homecoming game and tried to knock ACCS, one of the top two teams in all of Class 4A, off the ranks of the unbeatens. And the Wildcats had their share of opportunities to do just that.

The Rebels jumped out to an early 14-0 lead thanks to touchdown passes of 42 yards to Tristan Burns and 22 yards to Riley Roach. The Wildcats got more aggressive defensively and kept ACCS out of the end zone for most of the rest of the first half.

That allowed Silliman’s offense to get going — especially through the air. Senior quarterback Ty Lipscomb hooked up with Cannon Carruth on a 19-yard touchdown pass at the 6:52 mark of the first quarter to cut the Rebels’ lead in half and then the two connected again, this time on a 13-yard TD pass with 5:34 remaining in the second quarter to tie the score at 14-14.

But just when it looked like Silliman was going to go into halftime all squared up, ACCS had other ideas. The Rebels marched down the field and Carter threw at 26-yard touchdown pass to Terrell Tenner with 40 second left in the first half and Samuel Merriett’s extra point gave them a 21-14 halftime lead.

Carter completed 14 of 24 passes for 214 yards and the three touchdowns. Tenner had 12 catches for 57 yards to go with three receptions for 42 yards. Burns finished with five catches for 114 yards. Roach had three catches for 37 yards.

Stampley’s five-yard TD run with 8:07 left in the third quarter gave the Rebels a 28-14 lead. Then with time winding down in the quarter, Lipscomb threw a long pass to Carruth near midfield, who jumped over two defenders to grab the ball out of the air, landed on his feet, and outran the defense into the end zone for an 81-yard touchdown to make it a 28-21 game with 0:52 left.

Stampley had four carries for 23 yards and led the Rebels’ defense with 12 tackles. Connor Aplin had eight tackles, Alex Pollard had seven tackles, and Josh Davis had a big interception to go with three tackles

Both teams had their chances to score in the fourth quarter, but both ACCS and Silliman either turned the ball over on downs or ended up having to punt the ball. And when the Rebels got the ball last with just over a minute left, they got the first down they needed and ran out the clock.

ACCS (7-0) plays host to Tri-County Academy in an MAIS District 3-4A showdown between the top two teams in all of Class 4A Friday at 7 p.m.