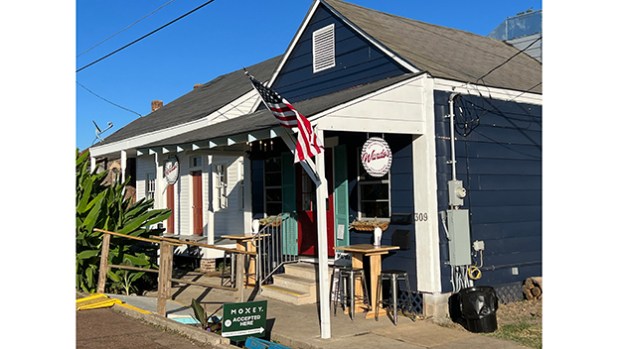 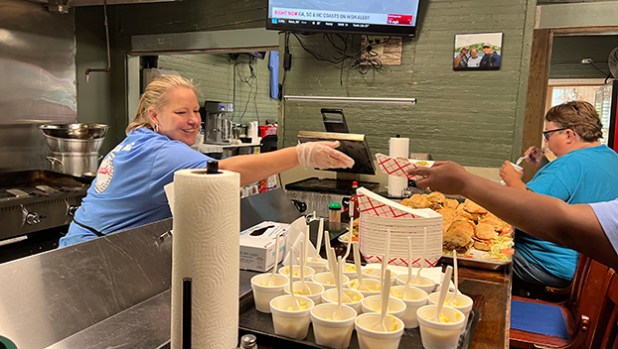 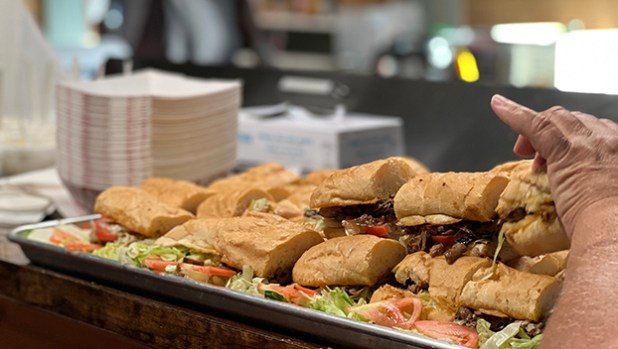 “The Wardo,” one of the sandwiches offered at the restaurant made Ward Graning’s favorite roast beef and house gravy. (Sabrina Robertson | The Natchez Democrat) 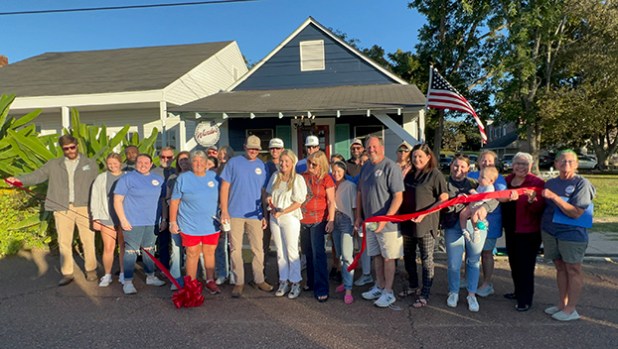 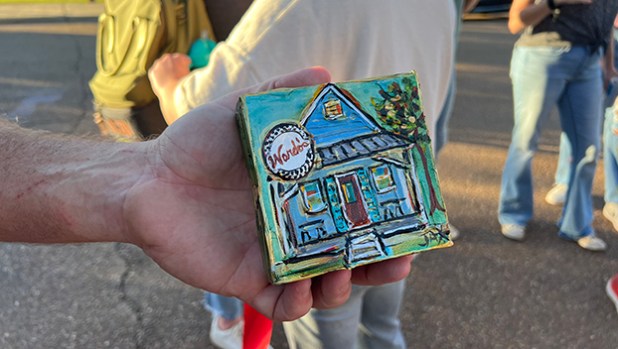 One of Jax Frey’s miniature paintings of the Wardo’s restaurant on the Natchez bluff. (Sabrina Robertson | The Natchez Democrat)

NATCHEZ — Sometimes a one-page menu is all that’s needed to find something to satisfy a hungry stomach, and that’s all you’ll find at a new Po Boy restaurant on the Natchez bluff.

“There’s really nothing else like it around here,” said Tom Graning, one of many in the Graning family whom all run Wardo’s New Orleans-style Po Boys at 309 N. Broadway St.

The new restaurant celebrated its grand opening and ribbon cutting on Thursday.

Wardo’s offerings are streamlined with a choice of eight different sandwiches and sides of Zapps potato chips, cole slaw or potato salad. There are also red beans and rice or gumbo and hot dogs, grilled cheese, chicken strips or peanut butter and jelly for the little ones.

The restaurant turned out to be more popular than the Granings thought it would be, he said. Wardo’s is now working to add more covered outdoor seating behind the restaurant to accommodate the number of hungry customers they’ve seen.

“It’s supposed to be a simple idea that wouldn’t take a whole lot of effort,” Graning said. “We’ve been open a little more than a month and it has been a lot more work than we ever expected it to be. I knew it would be busy, but I wasn’t sure how busy and it has taken off a lot more than I thought it would.”

The location didn’t hurt. Wardo’s sits on the Natchez bluff where a weekly farmer’s market sets up shop and seasonal festivals, like the Blues & Soul Superbowl coming this October, are held.

The restaurant is named in honor of Alan Ward Graning III, or “Wardo” as he was affectionately called by his friends and family.

“He died unexpectedly about three years ago,” Graning said.

Wanting to honor him in a special way, the family immediately created the Ward Graning Scholarship fund and distributed it to students at Cathedral. Ward Graning’s siblings had been deliberating the idea of creating a restaurant for years and set to work on it last spring. Some in the family have experience in the business. Graning’s sister, Jane Weems, and her husband Sam Weems run the Waterfront Grill in Monroe, Louisiana, and Graning has a restaurant inside the Go Mart convenience store in Natchez.

Starting the restaurant proved to be a bigger challenge than expected, Graning said.

They rebuilt the building and added the kitchen and everything needed to make a restaurant out of an old shack on the bluff.

“A lot of family work went into it,” he said.

They anticipated opening around May or June. The restaurant opened in August.

The most fun part, Graning said, was naming the sandwiches, many of which are fun twists on family names.

The Wardo, made with Ward Graning’s favorite roast beef and house gravy; Ol’ Tom Turkey; Baylee’s Oh So Hot Ham; The Junkin, made with traditional New Orleans debris, slow-cooked pot roast with juice; Aunt Sissy’s Meatball Marinara and The Mighty Mississippi Muffuletta are a few of these offerings.

Currently, Wardo’s is 85 to 95 percent family-run but the door is open to anyone interested in applying for a job, Graning said.

Margaret Beesley said she goes to work teaching in Franklin County, goes home long enough to change clothes and comes straight to the restaurant. She rolls up her sleeves to start making sandwiches, washing dishes or whatever needs to be done.

“I don’t belong in the kitchen and everybody knows it,” she said. “Every member of the family takes shifts, extended family as well. It has been a long couple of months of hard work but has definitely paid off. It has been very rewarding. We always laugh and joke because brother Ward is probably up there rolling with laughter saying, ‘What the hell are y’all doing in the kitchen?’”