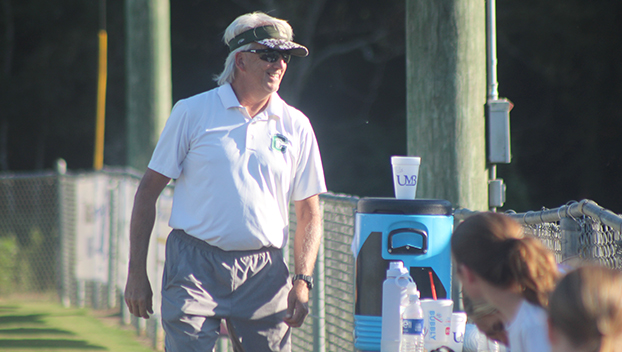 MERIDIAN — A promising season for Cathedral High School’s varsity girls’ soccer team came to an end last Tuesday afternoon as the Lady Green Wave lost to the Lamar School Lady Raiders 6-2 in the first round of the MAIS Division II Playoffs.

Cathedral entered the playoffs on a two-match winning streak and as the South No. 2 seed with a 10-4 overall record. Unfortunately, the Lady Green Wave was no match for a Lamar School team that earned the Central No. 1 seed.

“To put it in a nutshell, we were just outmanned,” Cathedral head coach Dennis Hogue said. “We had 14 girls make the trip. One of them couldn’t play from a knee injury. They had probably 30 girls on the roster. For every girl on the field, they had two girls on the bench that they could sub in. We were the exact opposite.”

And the difference in depth between the two teams was one factor in the outcome of the match. The other was how aggressive Lamar School was, especially in the first half as the Lady Raiders scored four goals while shutting out the Lady Green Wave for a 4-0 halftime lead.

“Our girls played well. They gave it 100 percent the entire match,” Hogue said. “They had a lot of talent. Seems like every girl had quality touches. They had a few more talented players than we do and it makes a difference.”

While Lamar School scored two goals in the second half, so did Cathedral. Maddie Verucchi scored both goals after halftime for the Lady Green Wave. The first one was in the 21st minute and the second one was in the 30th minute on a free kick after she was fouled. Hogue described the kick as one of the prettiest free kicks he has ever seen.

“It was a perfect kick. It was a looping kick. They built a wall over her, so she had to kick it over that wall. She kicked it high and it just dropped under the crossbar. It was just over the outstretched hands of their goalkeeper. It was pretty,” Hogue said.

The final score actually could have been more lopsided in the Lady Raiders’ favor had it not been for the performance of Cathedral goalkeeper Mollie Foster, who finished with about a dozen saves.

“She was fantastic. The score could have been a lot worse,” Hogue said. “She was on top of her game.”

Hogue also described the difference between the number of players Lamar School had and those on Cathedral’s roster as “the curse of the small school paying a big school.”

“The ability to keep fresh players on the field, rest players, as opposed to us, it’s taxing. It makes for a long game,” Hogue added.

Cathedral finished the season with an overall record of 10-5. Which was probably not expected after the Lady Green Wave lost so many players from the 2021 squad.

“We talked after the match and I told them how proud I was of them. Nobody whined. Nobody complained. At the beginning of the year, there was some concern about what kind of team we would be after losing 10 seniors from last year’s team,” Hogue noted. “They really outperformed how they expected to be. We’re losing seven seniors this year. The younger girls were like, ‘We’re going to be fine next year.’ They’re looking forward to next year.”