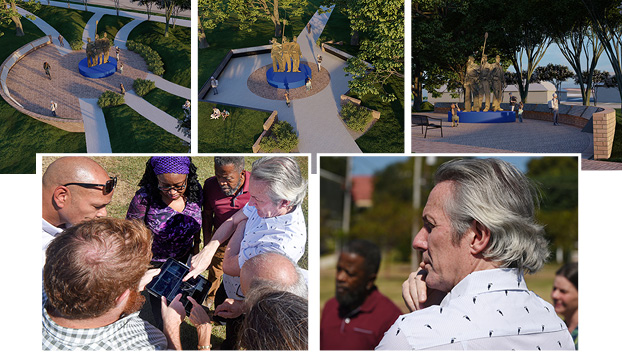 The three imposing figures represent the three military areas formerly enslaved men served at the end of the Civil War. Those soldiers include more than 8,000 men from Natchez.

“I tried to have it so when you approach the site, the soldier in the center looks straight at you. The sailor is looking off to the river. The heavy artilleryman is looking to the right,” said Jay Warren, a Mississippi native chosen to design and create the U.S. Colored Troops Monument, which will be located on the north end of the bluff in Natchez at Madison and Broadway streets.

Warren’s monument is designed to allow the sun to pass across it, illuminating each part of it during the course of the day.

“We want to honor these men with a big, powerful piece. You don’t want to minimize them. We want it to stand with any other monument about the Civil War in the country,” he said.

Warren said he hopes to be able to use the faces of descendants of U.S. Colored Troops from Natchez as the faces on the three men in the monument.

“We are going to look for young men who are descendants who want to post or have their faces on one of the statues,” he said. “This is a good time to put the word out. If you are a descendant and want your face to be one of the faces of the soldiers in this piece, let us know. If we get a lot of people wanting to do that, maybe we can put the faces out and ask the public to vote and see what faces they like the best.”

If you know or are a young man who is a descendant of a U.S. Colored Troops soldier from Natchez and are interested in being the face of one of the soldiers on the monument, please email natchezusct@juno.com.

Warren and his team were in Natchez Tuesday night to gather input on his design from community members. About 50 people gathered at 6 p.m. at the Natchez Convention Center and studied three potential designs Warren submitted. Another 240 more have viewed the Facebook video and even more the YouTube video of the meeting. 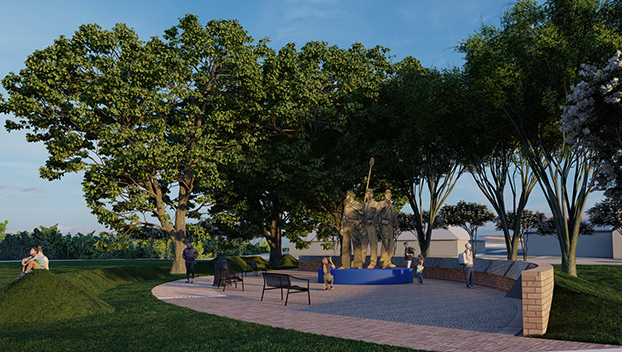 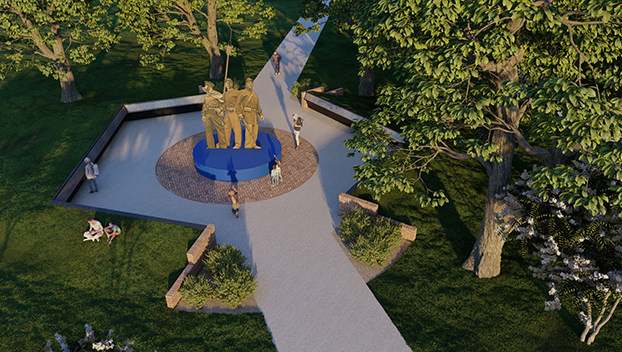 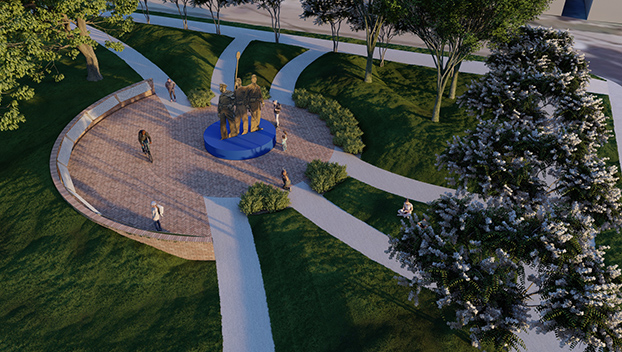 Warren said he reached out to Natchez Architect Amelia Salmon to put together his design team. Salmon recommended local talent to work with Warren on the project, such as Jerry Hill, who has been chosen to create renderings and three-dimensional models of the monument.

Brantley Snipes of Greenwood will serve as a landscape architect.

“I am so happy to be back in Mississippi and to have someone on the ground here in Mississippi to work with,” Warren said. He grew up in the Mississippi Delta and graduated from Rolling Fork High School in 1976. He now lives in Rogue River, Oregon, where Warren Sculpture Studios Inc. is.

Community members offered their opinions and ideas to enhance the team’s three designs. Overwhelmingly, community members thought more seating was needed within the site’s footprint. Most said they were pleased with the design options.

Joe Smith, an owner of The Guest House Hotel in Natchez, suggested the designers find a way to inject color into the monument site.

“Just from a cultural aspect, for people of color, color is an important part of the way we express ourselves. I wonder if we can use the walkways to express more of the African American heritage,” Smith said.

“There are lots of options to do that,” Snipes said. “There are tons of different paving patterns and concrete stains and many options for doing that.”