AC finds a way to win in fourth quarter comeback 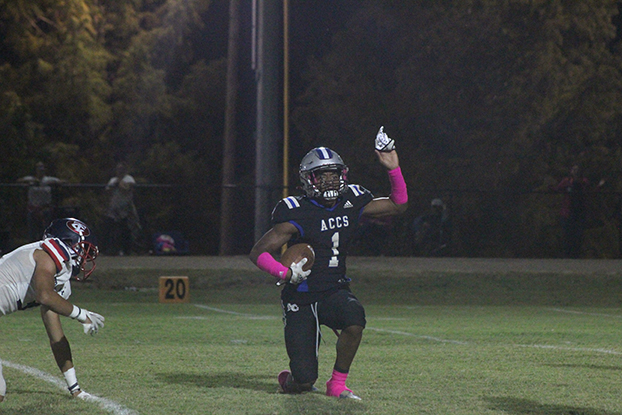 NATCHEZ — Adams County Christian School was able to kill the clock and hold on to a 21-20 win over Tri-County in a football matchup that pitted two 7-0 teams against each other onFriday.

The win moved Adams County Christian School to 8-0 and Tri-County fell to 7-1. AC’s Takey Stampley scored the first touchdown of the game and he scored the last one. Both were short three-yard carries.

“It felt good to score on a district team we might see in state. It feels good. I’m proud of my team and my coaches,” Stampley said after the game. “The offensive line is very good. We have been better at the run or and we keep being physical and they have been doing good all year. By halftime I started to second guess. We got a stop on defense, and I said we could do it. We finished the game off.”

The stop on defense was a big fourth down stop that led to a touchdown for ACCS. Stampley said the defensive stop helped hype the players up, and they took the energy to the endzone.

Quarterback Coleman Carter had a hard time in the first three quarters of play but he pulled things together in the final frame. Marching ACCS down the field, he rolled out to his right and threw a laser to Jessie Grayson who made a diving catch. This gave AC the first touchdown of a 14-point comeback.

“I had to dive for it. I knew the team was down and a big play could spark it off,” Grayson said.

“We fought to the finish. This team is special because  we show up on game day. I’m glad David King is my coach. Not many have given me the opportunity and he has. He sees something special in everybody; you just have to give it your all. He just knows.”

AC’s victory was sealed with a defensive play and two quarterback scampers by Carter to get first downs, burn timeouts and drain the clock. Tri-County, who scored all three touchdowns on pass plays, started to march down the field near the 50.

A deep pass by the quarterback over the middle did not find a Tri-County receiver but it did find the hands of Tristan Burns. His interception sealed the game for AC and gave them the ball with about 1:45 left in the game.

“It was electric. Someone had to make a play. It was a battle. It was physically and mentally a battle tonight,” Burns said. “We didn’t expect anything less, we knew it would be a battle and we responded. We have a lot of young guys. We all play together and we have each other’s backs.”

AC will take on Christian Home Educators Fellowship in Baton Rouge next Thursday. Kickoff is set for 7 p.m.