SAY SOMETHING: Concordia Parish students learn about issues that may affect their futures 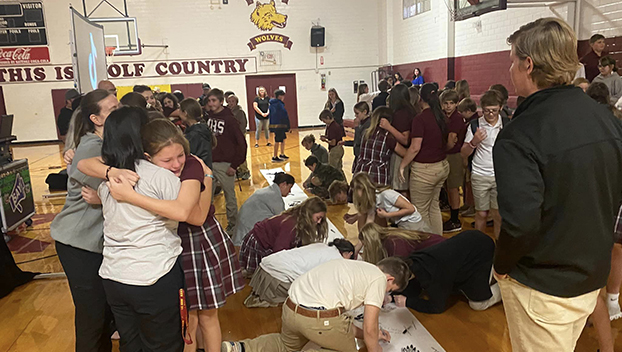 VIDALIA, La. — Junior high and high school students from all over Concordia Parish heard powerful testimonies last week of what it means to be a victim of human trafficking, addiction, and bullying.

Another issue talked about was suicide. Jody Dyess said he nearly lost his daughter Emily because some girl at her school thought it would be funny to text her and tell her to kill herself.

“What she chose didn’t just affect Emily. It affected our whole house,” he said.

After his testimony, students were invited to the floor to hug their teachers and school staff, talk to them about what is going on in their lives and write down their burdens on a roll of paper spread out on the floor of the school gymnasium.

These messages for Concordia Parish School District students were brought to them by Say Something Assembly, a non-profit group based in Brandon Mississippi that aims to help students recognize and respond to issues in society that threaten their futures, the group’s website states.

Thanks to a sponsorship from Concordia Parish Sheriff David Hedrick and Delta Bank, they were able to come to Vidalia, Ferriday and Monterey.

Protecting innocent children is a cause that is important to Hedrick, he said. This year alone, Concordia Parish Sheriff’s Office has apprehended more than 30 people for crimes against children, one of the issues talked about during these assemblies.

“When you hear the phrase human trafficking, a lot of people think of foreign countries, but that isn’t the case today. Human trafficking is an issue racing across this country at a rate we’ve never seen,” said Caleb Monson, one of the speakers.

He added human trafficking also doesn’t look the same as people think. The most common form of human trafficking is done with social media. Usually, it happens by that person convincing the other to send them a picture with a fake promise that they wouldn’t save it or would delete it. Then that photo can be used to exploit them for money or sex.

“Snapchat is one of the biggest producers of child pornography and almost all of it is self-produced,” Monson said.

Leah Daughdrill shared her testimony of being human trafficked from a young age and then falling down a path of addiction. She continued to struggle for nine years until a program called Teen Challenge of Mississippi saved her life, Daughdrill said. Her problems could have ended a lot sooner if someone, anyone, would’ve noticed and said something about it, she said.

Through her testimony, Daughdrill encouraged students to recognize the signs that one of their friends may be going through the same experience she had.