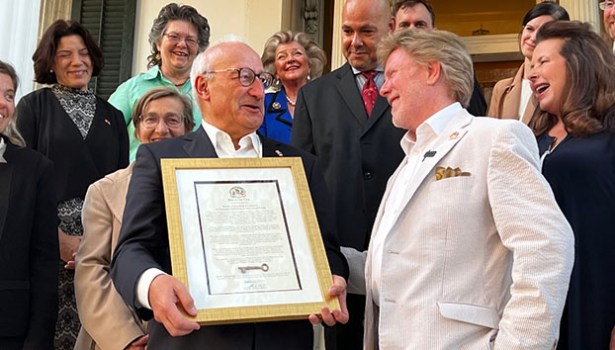 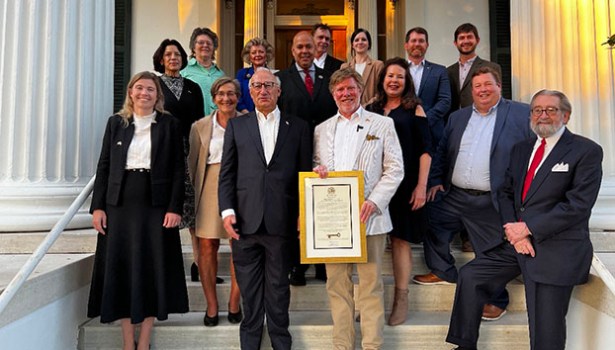 Ambassador of France to the United States, center left, poses with Natchez Mayor Dan Gibson and other members of the Natchez community. (Submitted) 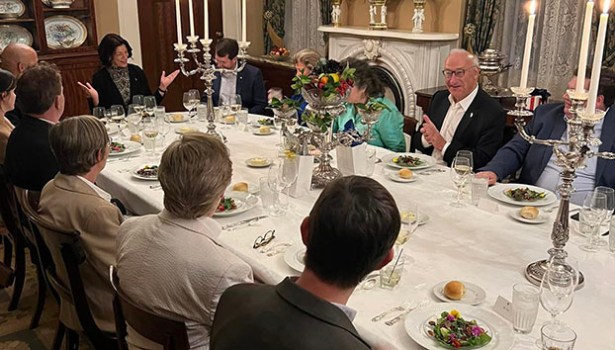 The French ambassador and his group dine with the mayor and other Natchezians at Stanton Hall. (Submitted) 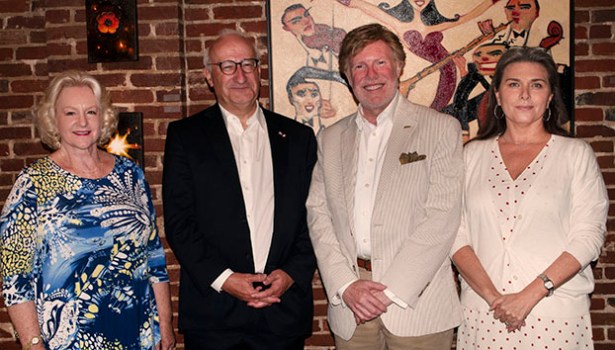 NATCHEZ — The Ambassador of France to the United States, Philippe Etienne, had a full day visiting Natchez Saturday.

Etienne and Natchez Mayor Dan Gibson met about a month ago when both attended the Mississippi River Cities and Towns Initiative Conference in St. Louis.

Gibson invited Etienne to visit Natchez, founded by the French in 1716.

Etienne toured the city, including the Fort Rosalie site, and had lunch at Rosalie. Later in the afternoon, Gibson, Etienne, and his group met with several Natchezians at Conde Contemporary for an arts and cultural heritage discussion.

At Stanton Hall, the Pilgrimage Garden Club hosted the entourage for dinner.

Gibson presented Etienne with a key to the city.

“It is so beautiful. It was a marvelous day, thanks to your hospitality,” Etienne said. “We have made many memories. The day was also important to me as ambassador.”

Gibson said he is grateful for the rekindled relationship “between Natchez, the jewel of Mississippi, and France, the jewel of Europe.”

Etienne, fluent in six languages — French, English, German, Romanian, Serbo-Croat, and Russian — thanked Gibson for the key to the city in each of them.

“On behalf of myself, my wife, and the consul general, thank you from the bottom of our hearts for your hospitality,” Etienne said.

At Stanton Hall, the ambassador and his group, as well as several guests from the city, dined on tournedos of beef with bordelaise and béarnaise sauces, Provencal salad, and bread pudding soufflé, created by The Continental Cook at the Carriage House’s Wayne Bryant Canon and staff.

Later in the evening, the ambassador and his group took in the Blues and Soul Super Bowl concert featuring Patti LaBelle.

The ambassador and his wife spent the night at Dunleith.

On Sunday morning, the group was to have breakfast at Magnolia Hall, hosted by the Natchez Garden Club.