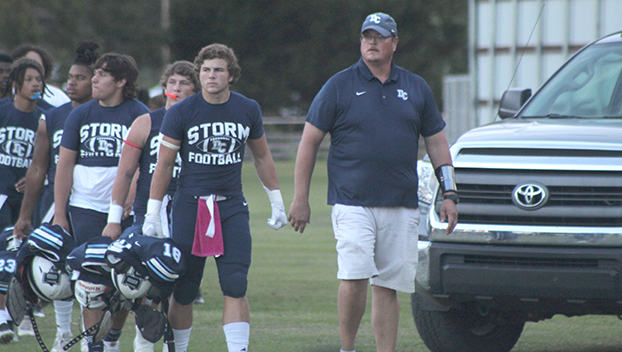 Delta Charter Head Coach Blake Wheeler leads his time into a pivotal district game against Sicily Island this week. Delta Charter is 3-2 on the season and 1-0 in district play while Sicily Island is 1-5 with a 1-0 district record. (File Photo | The Natchez Democrat)

FERRIDAY — Sicily Island High School and Delta Charter School will renew their rivalry Friday night as the Storm welcome the Tigers for homecoming in a pivotal LHSAA District 4-1A game for both teams.

Kickoff between Sicily Island (1-5, 1-0) and Delta Charter (3-2, 1-0) is slated for 7 p.m. The Tigers won their first game of the 2022 season last Friday night as they defeated the Block High School Bears 36-24 to claim bragging rights between the Concordia Parish rivals. It was also the first time those two teams met as district rivals as they are both in the new District 4-1A.

“The kids were excited. Hopefully, it will instill some energy and they will continue to want to win,” Sicily Island head coach Curtis Shavers said. “This was more like a championship game for parish rights. Kind of like in Concordia Parish with Ferriday and Vidalia.”

The Storm took care of the Tensas High School Panthers in a District 4-1A match-up on the road last Thursday night 52-8 to snap a two-game losing streak. Now it looks forward to taking on the Sicily Island as each team tries to stay undefeated in their new district alongside Delhi Charter School.

Shavers said the key to his team’s win over Block was that the Tigers finally showed up and played a complete game as a complete game on both sides of the ball — with a few exceptions.

“They had a good defensive effort, except for a couple of big plays and on kickoff returns,” Shavers said. “The offense played both phases of the ball well, running and passing. They were able to hit some key passes and were able to move the ball offensively through the air. It was a total team effort.”

Shavers added that the effort and performance was something he and his assistant coaches knew his players could do, but they weren’t doing so — until last Friday night.

As practice at Sicily Island continues, Shavers said the Tigers will be working more on its offensive game plan and that defensively, they’re pretty much set and ready to go.

“Offensively, we’ve been working on some things that we hope they don’t expect to see,” Shavers said.

When asked what concerns him the most about Delta Charter, Shavers said that his team needs to show up and play if the Tigers are to come out with a win Friday night.

“If we can do what we do, we can stay competitive with them. It just comes down to us playing sound defense,” Shavers said. For that to happen, the Tigers will need big games from their offensive line, quarterback Garterrius Cooper, and their running backs and wide receivers.

Shavers said a win for Sicily Island over Delta Charter at the Storm’s homecoming game would be huge for the Tigers, especially considering the Storm has won three straight games in this budding rivalry.

“It would mean a lot to our kids. Delta Charter is one of the games we look forward to getting up to,” Shavers said. “We have a lot of kids from Catahoula Parish who end up at DCS for whatever reason. It’s kind of a rival game now.”