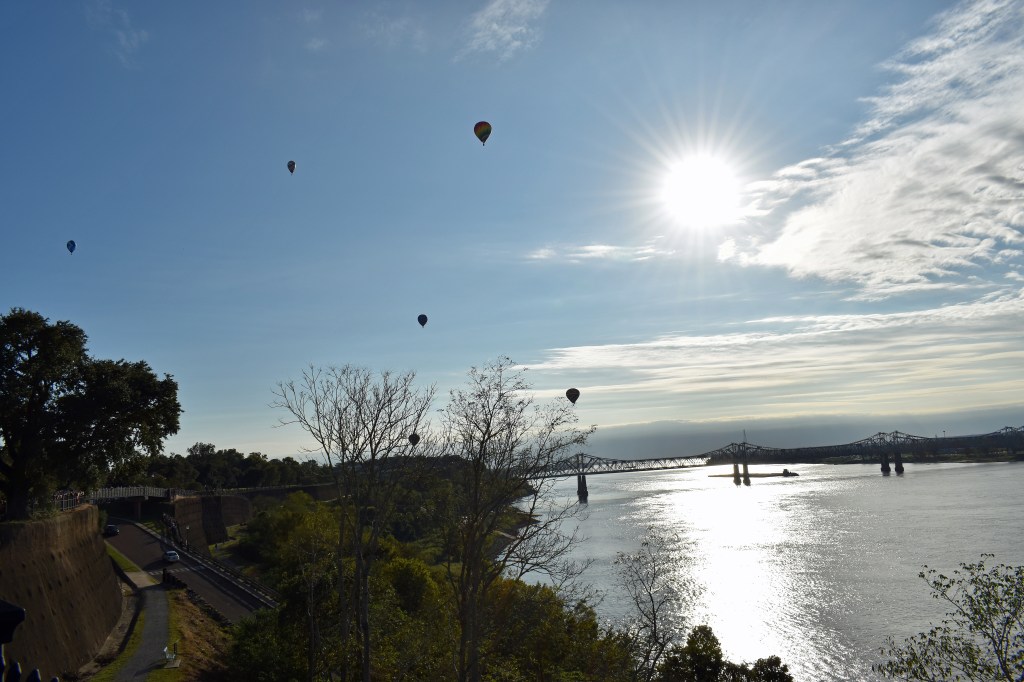 Balloons fly over the Mississippi River during the 2020 Natchez Balloon Festival. (File photo | The Natchez Democrat)

NATCHEZ — The Mississippi River at Vidalia and Natchez has reached its lowest point since 2012, but not the lowest ever recorded.

According to river stage data from the Jackson National Weather Service, as of Tuesday afternoon, the river stage at Natchez was just under 13 feet and forecasted to crest at 13 feet before the weekend. It could recede to just above 11 feet by Oct. 24.

“Ironically, this was right after we had a historic flood in 2011, so it’s like we went from one extreme to the other,” said Daniel Lamb, a meteorologist at the National Weather Service Jackson office.

The lowest stage was recorded at negative 1.7 feet in 1940. River stages are not the same as depth, Lamb said. The zero level is based on long-term data and can be at different depths depending on what area of the river is measured.

“That’s why you sometimes have negative stages. Even if the river stage is zero, it’s not empty,” Lamb said.

The flood stage at Natchez is 48 feet.

“This is the typical time of year that it’s lower,” Lamb said, adding the dry season between September and December plays a role. The river is usually at its highest between March and May, largely because of snowmelts in the early Spring, he said.

However, areas that the Mississippi River pulls its water from have been drier than normal.

“As much as any contribution of local rainfall … the river level is impacted a lot more by what’s coming from upstream,” Lamb said. “It’s been quite dry upstream from Natchez in areas that feed into the river.”

“It has been dry in those areas for a prolonged period,” he said.

Low water has caused some barges to run aground despite low water restrictions on load sizes.

Vidalia Mayor Buz Craft said he hasn’t heard of the low water disrupting river traffic to and from Vidalia but feels that it might soon.

“I feel that it’s going to just from past experience,” he said. “I can remember one year (the river stage) got down to 9 foot something. Sandbars exposed go out to the middle of the river. Navigation is going to be tighter right through Natchez and Vidalia but I can’t see river traffic being completely shut down.”

The low water has lowered the production of power at the Sydney A. Murray Hydroelectric Station, located 40 miles South of Vidalia, which lowers town revenue from the less power being sold.

“It does hurt,” Craft said.

The town collects royalties equal to 6 percent of the power generated by the plant. Craft said typically, the revenue from that would be $3.3 million per month from 6.6 million kilowatts of power sold. However, the town saw only $974,000 of that in their last royalty check for 1.7 million kilowatts.

“We’ve been good stewards of our funds and we’re solid in paying bills but it does cut into our revenues,” Craft said. “We’re in good shape. … This is the first year in a long time we’ve been blessed not to have a lot of flooding issues. Spring rain will bring the water level back up.”