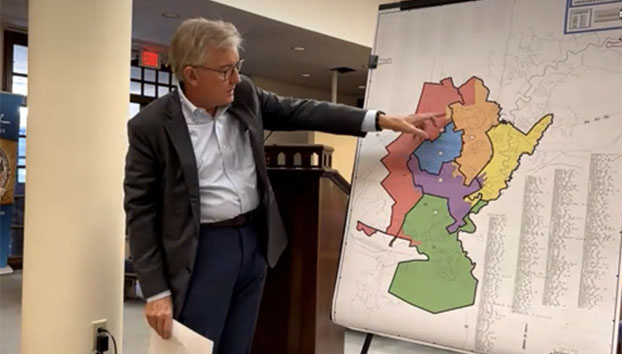 Tommie S. Cardin of Butler Snow of Jackson, hired to help the city redistrict its wards, explains a draft map to aldermen on Tuesday morning. (Submitted)

NATCHEZ — A public hearing has been set for Tuesday, Nov. 22, to present a plan to redistrict the wards in the City of Natchez.

Tommie S. Cardin of the Jackson law firm Butler Snow, was hired by the city to lead its redistricting effort.

On Tuesday, Cardin presented a draft map and plan to aldermen and asked them to set the public hearing to present the plan to the public.

He said Wards 2 and 5 need to gain population, Wards 3 and 6 need to reduce populations, Ward 4 is “almost perfect,” and Ward 1 is “a little low.”

In walking aldermen through the draft map, Cardin talked about guidelines used to redraw the wards.

“A census block is a geographic area,” Cardin said. “We try our best to draw on whole census blocks if at all possible. Several things on the map were the result of not splitting census blocks.”

The city will advertise the public hearing by putting legal notices in The Natchez Democrat and the Bluff City Post.

The proposed map and data sheets will be on the city’s website for the public to review prior to the Nov. 22 public hearing and will be in the city clerk’s office at City Hall, available for review beginning Wednesday, Oct. 12.