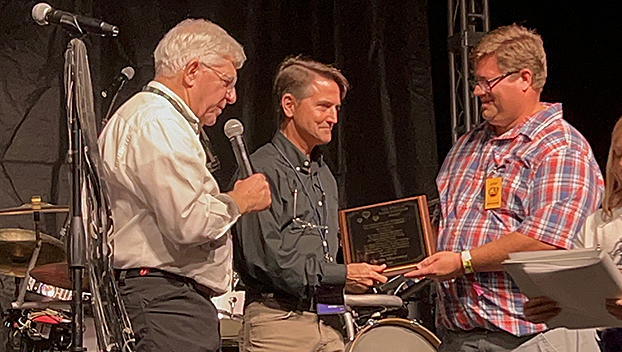 NATCHEZ — Each year on the first night of the Natchez Balloon Festival, the winner of a special award is announced, the “Spirit of David Steckler Award.”

This award goes to a volunteer who exhibits the same virtues as the late David Steckler, for whom the award was named—honoring their faithful service and tireless efforts that make the balloon festival possible.

This year’s award recipient Curtis Moroney has been a volunteer for the Natchez Balloon Festival for almost as long as it has existed, 33 years to be exact.

“He firmly believes in giving back to the community and embodies the key traits of a volunteer as he takes a fearless approach, thinks creatively and is loud and steadfast with his voice—that is, until, his voice is turned hoarse by the end of the event weekend,” said Peter Burns, as he presented the award.

Moroney said it was an honor to receive the award and thanked the countless other volunteers and spectators who make the event a success.

“There’s a lot of people that contributed to this event and have for many, many years,” he said. “Our other volunteers, our crew people and our spectators. That’s why we do it. It’s very rewarding when we see the fruits of our labors and all of the smiling faces. I couldn’t be more honored.”

The plaque reads, “To love without expectation, to give without exception, an open hand through which all caring flows, an open heart selfless and sharing, a spirit that gives a healing peace, this miracle of light that brightens another soul, a gift beyond price.”

Maroney said, “I knew David Steckler. He was a friend of mine. All of those words apply so, so well to David Steckler. And so it’s really an honor to receive this in his name.”

Moroney started volunteering as a crew member and from there graduated to balloon passenger, navigator, cyclist, balloon operations coordinator, breakfast cook and IT specialist.

It was Moroney who saw an opportunity to combine his love of cycling with hot air balloons as the creator of the balloon and bike biathlon, a beloved event where cyclists would fly and then race back to their destination from wherever they landed.

As head of pilot operations, Moroney has been charged with inviting and hosting pilots and acting as their sponsor liaison. He coordinates logistics and “answers millions of questions” before and during the weekend activities, Burns said. Moroney provides key information to pilots and to the media. Without him there would be no balloon spotting guide in The Democrat’s “Lift Off” publication.

“He stays connected and provides connections,” Burns said. “He stays close to balloonists year-round, attending events and recruiting new pilots to experience the Natchez event, and he provides connection in the setup of the network at the festival site utilizing his personal equipment.”

In addition to the balloon festival, Moroney has many other annual commitments, Burns said.

“He gives back to his hometown 365 days a year as a member of Rotary, the Natchez-Adams Chamber of Commerce, the local Habitat for Humanity Committee, the Christmas in Natchez Committee and many more.”

Moroney’s name, along with all of the previous winners’ names of the Steckler award, are listed on a perpetual plaque donated by balloonist and long-time friend of the Steckler Family, Pat and Carol Canon. This award is displayed year-round at the Historic Natchez Foundation.