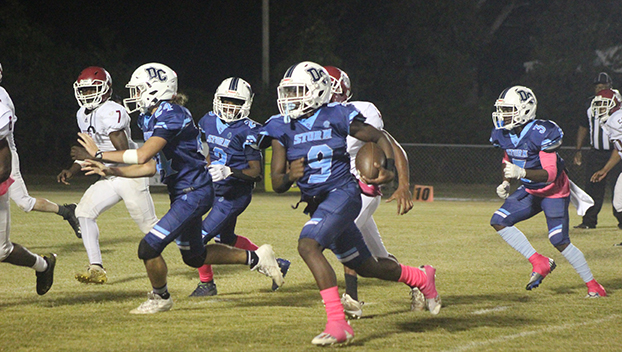 FERRIDAY, La — Delta Charter (4-2) beat Sicily Island (1-6) on homecoming night 44-16. They might not have played their best game, but Storm head coach Blake Wheeler said he saw improvement in the second half.

His final touchdown came after he nearly completed a pass to his cousin in the endzone. “It felt amazing to get in the endzone tonight. We are not a great team but as long as I have fun with them I am happy,” Cooper said. “We just don’t have the numbers right now so it is tough. It would mean a lot to me to see the program get better. That first touchdown tonight gave us a lot of hope. We needed it.”

Delta Charter’s play of the game came from Aidan Ferguson as the senior lineman lowered his shoulder and plowed into the endzone like a tank. His five-yard touchdown rush was his first career touchdown. It was a special moment for him on homecoming.

“It is the best feeling I have ever had. It feels a lot different than you would imagine scoring a touchdown,” Ferguson said. “We had a play last year where I would go out for a pass. but it never made it into a game. I have waited probably two years if not my whole career. It is everyone’s dream to score a touchdown, especially for linemen.”

The team tried a similar play this time giving the ball to a teammate on a two-point conversion with Ferguson pushing the runner forward. It was not successful.

He had an idea that they might try to get him the ball when they got close to the goal line. In warmups, they ran through the play a few times.

“It was hard to contain the excitement. I couldn’t hold on to the ball in warmups just thinking about it,” he said.

His brother Tyrin Singleton had a phenomenal game for Delta Charter. Tyrin scored on a 20 yard rush, a 20 yard pass from Juvari, and a seven yard rush in the first quarter to give Delta Charter the lead.

“We always win on coming. Sicily Island always comes out and tries to beat us but we just play our game,” Tyrin said. “My brother and I go to the field every weekend to work on his throwing. We have good chemistry together. We can get better by practicing hard and listening to our coaches, shout out Coach Wheeler.”