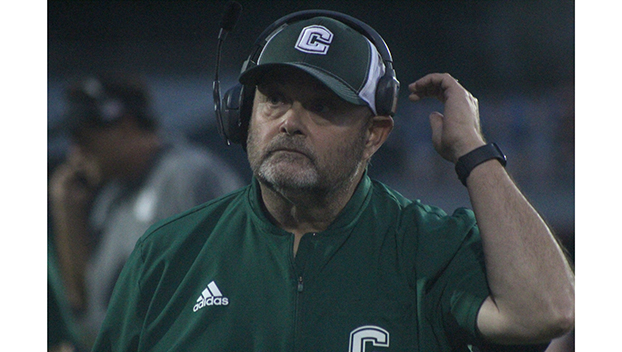 Assistant Coach Kurt Russ challenged the team to play with fight and passion earlier in the season after a defeat at Parklane. They continue to play with passion despite the final result Friday night.

NATCHEZ — The Cathedral High School Green Wave needed a win last Friday night over the Silliman Institute Wildcats to keep their dwindling playoff hopes alive in this critical MAIS District 3-5A game for both teams.

At the end of the first half, it looked like Cathedral was on its way to doing just that. However, Silliman responded with 21 straight points in the second half as the Wildcats held on for a 35-25 victory over the Green Wave.

It was both Senior Night and the annual Pink Wave Game for Cathedral at D’Evereaux Stadium. Which meant even more for the Green Wave seniors playing their final home. They wanted to go out with a win on their home turf. However, Silliman would eventually have other ideas.

“Tonight, I thought we played one of our best games against a quality opponent. We really battled,” Green Wave head coach Chuck Darbonne said. “There was very good execution of the offense in the first half that gave us the lead at halftime.

“Offensively and defensively, it was one or two mental mistakes that killed a drive for us or kept a drive alive for them. And that put us in a bind in the second half.”

Isaac Garba scored on a nine-yard run and Boston Bentley added the extra point to give Silliman (5-4, 2-1) an early 7-0 lead. Cathedral responded with a two-yard TD run by Jake Maples and Brycen Hughes’s PAT to tie the game at 7-7 with 1:44 left in the first quarter.

And it looked like it was going to be that way going into halftime. That was until the Green Wave marched down the field and Hughes connected on a 28-yard field goal to give them a 10-7 halftime lead.

Both teams struggled to move the ball for much of the third quarter until Silliman took the lead for good on a 1-yard run by Garba to give the Wildcats a 14-10 lead. Two touchdowns over a span of just over three minutes gave them a 28-10 lead.

The Green Wave wouldn’t go away quietly was Noah Russ threw a 10-yard TD pass to Kaden Batieste and then connected with Jordan Henry on the two-point conversion to make it a 28-18 game with 1:01 left.

However, the Wildcats put the game away on a long touchdown run by quarterback Owen Fudge with just under 40 seconds to go for a 33-18 lead. The Green Wave scored on a 3-yard pass from Russ to Jacob Smith with about 12 seconds left, but they ran out of time.

I really thought we played passionate, emotional football,” Darbonne said. “It was Senior Night and Pink Wave. The kids had a lot of fire and passion. I was just very proud of the seniors for the passion, desire and leadership they played with, win or lose.”

Cathedral (3-6, 0-3) travels to Amite, La. to take on the Oak Forest Academy Yellow Jackets in the District 3-5A and regular-season finale next Friday at 7 p.m.