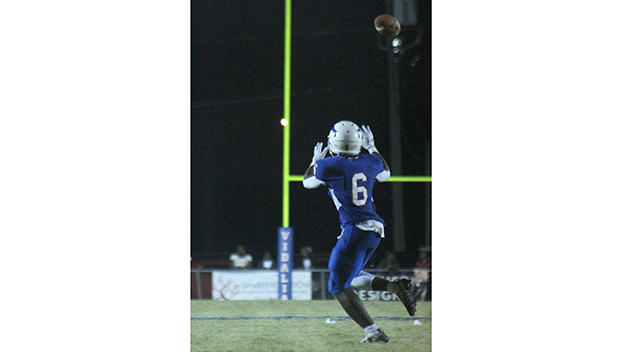 Kabari Davis helped out the Vikings with an interception returned for a touchdown Friday night. (File Photo | The Natchez Democrat)

VIDALIA — The Vidalia High School Vikings snapped a two-game losing streak thanks to contributions from their offensive line and their defense in a 26-6 homecoming win over the Rayville High School Hornets last Friday night in an LHSAA District 2-2A game.

The crowd at Dee Faircloth Viking Stadium wasn’t as big as it normally would be. Vidalia head coach Michael Norris said that the Natchez Balloon Festival falling on the same weekend had something to do with that.

“But the crowd we had was energized and into the game,” Norris said.

The Vikings jumped out to an early lead and never really let Rayville (1-6, 1-3) back in the game with the exception of early in the third quarter.

“We came out and controlled the line of scrimmage early. We scored a couple of touchdowns and went up 14-0. Then it pretty much went back and forth down the field, but nobody scored. We went into halftime up 14-0,” Norris said. “Our offensive line did a good job making the adjustments in the second half.”

Vidalia came out in the second half and had to punt on its first possession. The Vikings’ defense gave a big pass play that led the Hornets’ only touchdown of the game, but the try for two was no good and Rayville trailed 14-6.

“From there, our defense buckled down. Kabari Davis had an interception return for a touchdown,” Norris said. “That touchdown gave us the breathing room we needed.”