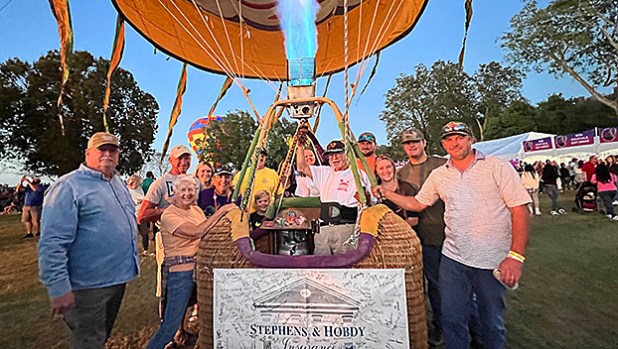 Robert and Sally Lupton with their crew members for the Lady Jester glow in Natchez for the last time Friday night, as the Luptons are retiring from ballooning this year. Their balloon, the Lady Jester, will stay in Natchez after the event. (Sabrina Robertson | The Natchez Democrat) 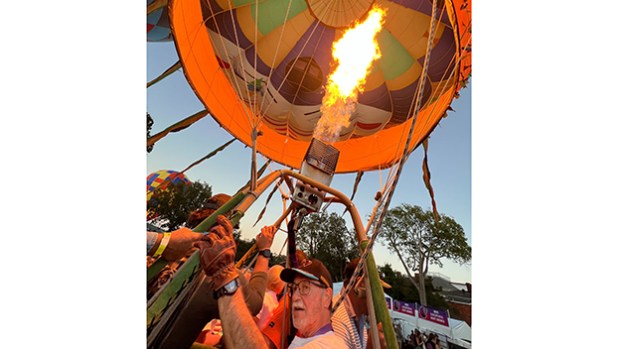 Robert Lupton glows in Natchez for the last time Friday night, as he and his wife Sally are retiring from ballooning this year. Their balloon, the Lady Jester, will stay in Natchez after the event. (Sabrina Robertson | The Natchez Democrat) 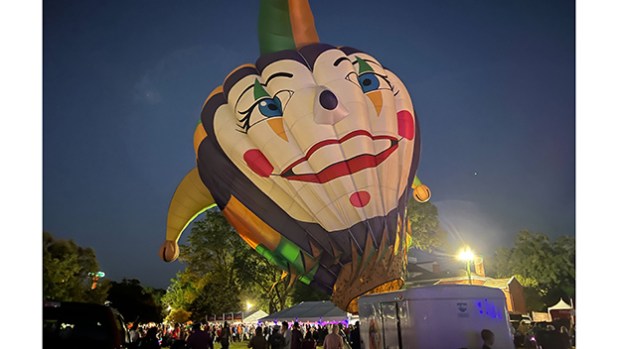 Lady Jester, the hot air balloon, will stay in Natchez after the festival ends. (Sabrina Robertson | The Natchez Democrat)

NATCHEZ — After more than 30 years of flying in the annual Natchez Balloon Festival, Robert and Sally Lupton, natives of Albuquerque, New Mexico, have decided to hang up their ballooning caps. Their unique balloon, called “Lady Jester” has become a local favorite for more than a decade of the event.

The couple is now retiring from hot air ballooning, making this year, the 37th annual festival, their last flight. However, Natchez has not seen the last of Lady Jester.

Tate Hobdy, who has been a crew member for the Luptons since he was 4 years old, announced Friday night that he and other members of the Natchez Balloon Festival committee bought Lady Jester from the Luptons. The balloon will now be used as a promotional tool for the event, Hobdy said.

“It’ll be cool to see the Lady Jester on a random weekend in Natchez,” Hobdy said. “It’s Natchez’s Balloon.”

Sally has been a licensed pilot for 41 years, she said, adding it’s sad to give it up.

“I taught (Robert) how to fly,” she said.  “I love this city and I love the whole thing. … I have no problem flying, but moving stuff around, especially if we’re by ourselves, has gotten pretty difficult. Getting things into the trailer and moving it is harder at 74 than it was at 30.”

On the Luptons’ first flight in Natchez, Tate Hobdy and his dad Braxton rescued them after they landed in a beanfield 20 miles outside of Natchez, Robert said.

“Tate and his dad came and got us at four in the morning (on Sunday) after a Saturday night flight,” he said.

Although the first flight was rough, Robert said he and Sally have flown together in more than 32 states and Natchez is their favorite place to fly.

“We wouldn’t drive a thousand miles each way to fly here every year if it wasn’t,” he said. “These people are our family. When Tate and Abby got married, I did the ceremony.”

For a change, they’ll be able to enjoy the merriment of the festival without the worry of making it to 7 a.m. and 4 p.m. flights each day. They have a tradition each year. They make each morning and evening flight but never on Sunday afternoon, the last flight of the festival. After breakfast at Braxton Hobdy’s, it’s finally time to relax and party, Robert said.

Robert guessed he has flown between 700 and 800 passengers from Natchez Balloon Festival. Though the Luptons are retiring, they’re not ready to say goodbye to all of their ballooning friends.

“We’ll still come back to Natchez every year, just without the balloon,” Robert said. “She is staying here.”