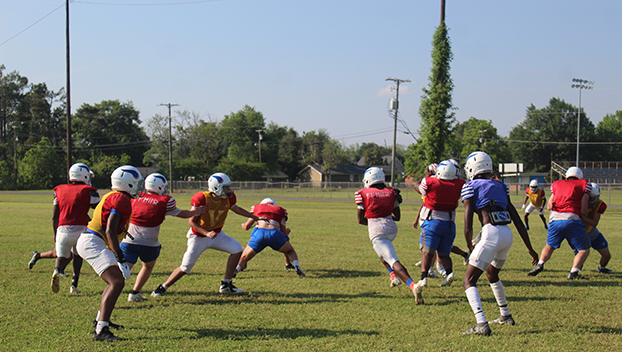 VIDALIA, La. — On Thursday, Concordia Parish School Board members voted to start a committee that would consider the feasibility of putting turf on the Ferriday and Vidalia high school football fields and surrounding them with a running track.

Marco Gonzalez, who is a project supervisor with Volkert Inc., estimated it would cost $2 million per field based on other fields he recently worked on in Louisiana.

Warren Enterkin, who was the lone board member to vote no to forming the committee, said the football fields should not be the Concordia Parish School Board’s main priority.

This was because of a mold issue recently discovered inside the central office. The building is owned by Steve Weeks of Vidalia. However, the school district is responsible for its maintenance needs.

The town council of Vidalia held two public meetings in August where they discussed spending millions of dollars in excess hydroelectric revenue for town improvements. A line item on the wish list was allocating $500,000 to the school district for turf on Vidalia High School’s football stadium. Vidalia Mayor Buz Craft sat in the audience as the school board discussed this project at City Hall on Thursday evening.

“We’re meeting in Vidalia’s board room because our board room is incapacitated,” Enterkin said. “We’re renting a building over there and we’re paying for it and now we’re talking about millions of dollars to do football fields. I think we’ve got our priorities a little out of kilter here. We need to look at a board room and a place to meet of our own rather than think about spending millions of dollars on the football fields.”

To be fair to Monterey, Enterkin added if the school district puts turf on the football fields they would also need to do the same to Monterey’s baseball field.

“Just off the cuff, he’s saying it’s $1.5 million times three. That is a lot of money for this board,” Enterkin said. “We need to think about where our priorities are rather than consider refurbishing the football fields at this time.”

School Board President Fred Butcher said the committee would be tasked with weighing the cost and benefits of putting turf on the fields. This doesn’t mean that the school board is committing to doing the project, he added.

In her motion, board member Lisette Forman specified that the committee would also look at the cost of maintaining the natural grass fields as well, Butcher pointed out.

“This is just to put some figures in place to determine where we are,” he said.