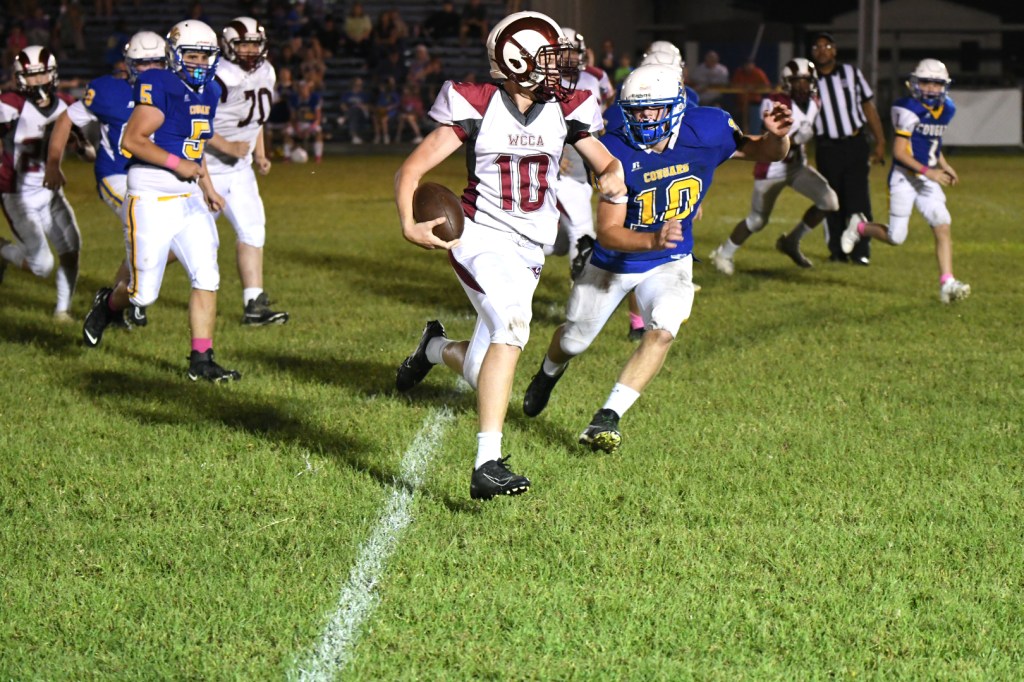 Jacob Sessions scored three touchdowns for the Rams in a huge upset over Riverdale last Friday. (Travis Murray | Special to The Natchez Democrat)

On Senior Night at WCCA, it was a mix of sophomores, juniors, and seniors who had big-time performances in leading the Rams to a stunning win over a Riverdale team that entered this game ranked No. 1 in Class 1A in power points.

“Our defense gave up 12 points to a Riverdale team that was averaging over 50 points a game,” WCCA head coach Randy Holloway said. “Our defense played very stingy Friday night. “Our offensive line, led by senior David Smith, and tailback Ryan Fisher had a big night. Fisher had over 100 yards rushing and over 100 yards receiving.”

After Kyle Guillory scored on a 29-yard run to give Riverdale (7-2, 1-1) a 6-0 lead with 7:24 to go in the second quarter, Sessions hooked up with senior tight end Nathan Mudd on a 12-yard touchdown pass with 5:26 left in the same quarter. Junior Gavin Davis added the extra point to give the Rams a 7-6 lead.

Rebels junior quarterback Ryder Huddleston scored on a 23-yard run at the 4:04 mark of the second quarter, but the attempted two-point conversion was no good and they led 12-7.

Sessions had without a doubt his best game of the season, completing five of seven passes for 164 yards and three touchdowns with no interceptions.

The Rams would add to their lead right before halftime on a 54-yard pass from Sessions to pass. Junior fullback/linebacker Jack Orgeron ran in for the 2-point conversion to give them a 23-12 halftime lead.

Fisher then added touchdown runs of 10 yards with 3:42 to go in the third quarter and 47 yards with 5:45 remaining in the ball game. He finished with three catches for 144 yards to go with 132 rushing and two scores on 20 carries.

Orgeron had 10 carries for 46 yards and led the Rams’ defense with 10 tackles. Fisher had seven tackles and three interceptions while Mudd had six tackles and one sack. Partridge had five tackles to go with three sacks.

As far as how this win for the Rams impacts the District 3-1A standings, Holloway said, “We split the district championship with Riverdale and Tensas Academy. That (which team will be the highest seed among the three teams) will be based on power points after this week.”

WCCA (6-3, 2-1) will travel to Florence to take on Class 2A Discovery Christian School at 7 p.m. Friday. The Lions are 1-7 overall and were off last week.