YEAR IN REVIEW: Department behind over 40 child predator arrests in less than 10 months gives rundown 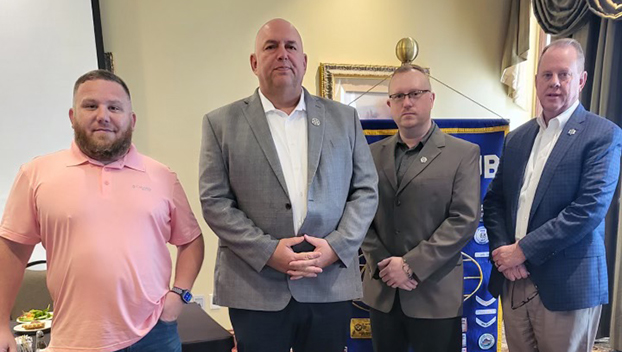 During his presentation, Lipscomb revealed how CPSO’s Cyber Crime Unit has been able to make more than 40 arrests so far this year involving sexual crimes against juveniles.

Hedrick started the CCU after he took office in August 2020 with the goal of helping the parish’s most vulnerable population before they become victims, he said.

“We are extremely aggressive when it comes to anyone harming an elderly person or a child,” Hedrick said. “We are pulling people out of the woodwork in a way that we’ve never been able to before. This grant allows us to pull sex offenders out of the dark corners of the internet where they are stalking our children. They’re coming from all over fishing for our children and in Adams County, too, and they’re trying to lure them. But instead of meeting children, they’re meeting our deputies.”

“I’m on their task force and go all over north Louisiana to find these predators,” he said. “As child exploitation became more prevalent, we needed the equipment and software to work these cases.”

Thanks to a grant from a national non-profit called Operation Underground Railroad, CPSO was able to enhance its software and equipment, he said.

“They exist solely to prevent child exploitation and human trafficking worldwide. They fund law enforcement agencies that want to work those cases and will pay to get a lab set up.”

The National Center for Missing and Exploited Children submits cyber tips to CPSO relevant to a case in the area.

“We’ve busted several people with child pornography right here in Concordia Parish,” Lipscomb said. Using geolocation, CPSO was able to help law enforcement in Adams County locate 19-year-old Bill Calvin, who’d been missing until authorities found his remains off of Booker Road in October 2021 and determined he had been murdered.

A victim’s advocate also works closely with the CCU to communicate with victims of domestic violence and sexual crimes and provide them with court dates, support and information.

The work of the department has not gone unnoticed by state leaders. Last year, CPSO was awarded the Community Foundation of Acadiana’s Leaders in Law Enforcement Award, which is given to one department each year for their exceptional work. With it, the sheriff’s office received a $35,000 check from the Brown Foundation to improve its operations.

CPSO also implemented the same program that Adams County E-911 acquired called 911Eye, which allows dispatchers access to a 911 callers smartphone camera with their permission and allows them to see what they see at the scene of a crime or an accident. The 911 caller can also chat directly with the dispatcher and share photos with them that could help investigators.

This helps prepare authorities before they arrive on the scene and keeps the 911 caller’s information private by only giving 911 access to the data they share and no other information on their device.

Additionally, the department purchased new portable radios and tasers and recently completed a renovation of the jail and dispatcher’s office at the Concordia Parish Jail.

Per the report, the department saw revenue of just under $15.5 million and expenses of approximately $13.1 million.

CPSO has more good things happening in 2022. On Wednesday, CPSO will have a ribbon cutting at its new administration office and community justice center at the former Delta Fuel office at 27797 Louisiana Highway 15 in Ferriday, Louisiana.