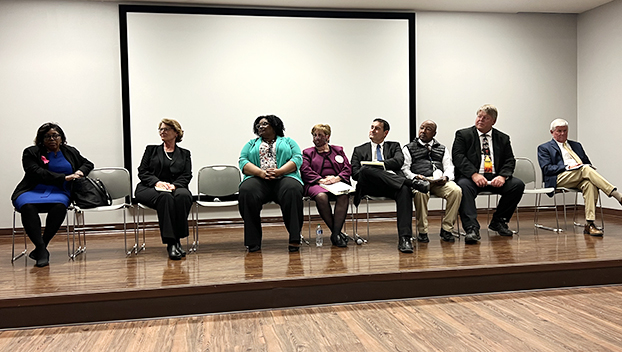 NATCHEZ — With the Nov. 8 General Election now a little more than two weeks away, candidates for two Sixth District Circuit Court Judge seats are on the campaign trail.

Six District Circuit Court Judge candidates and unopposed Chancery and County Court Judges voiced their platforms at a candidate forum hosted by the NAACP at Co-Lin this week.

Walt Brown is unopposed going into the election for his third term as County Court Judge.

“We’ve got two circuit court judge races going on right now. I don’t think we’ve ever had two at the same time and I certainly don’t think we’ve ever had six candidates running for those positions,” Brown said. “Chancery Court and County Court tend to fly under the radar but those two positions are in the crosshairs and under the microscope every day because they’re dealing with a lot of serious criminal cases.

“I invite you all to do your research. Go talk to your lawyers. Ask them, ‘Who do you think would make a fair judge?’ A judge that is not only compassionate for the victims but for the defendants as well. Talk to your law enforcement and ask them.”

Vincent Davis, who is unopposed for Chancery Court Judge post 1, said voters should not only consider who would be a fair judge but to also “be fair to the judges.”

“Don’t expect a judge to do something that he or she is not supposed to do,” Davis said. “All you need to expect is for that person to be fair, to be honest, and to follow the law. Even if you lose, if you’ve had a fair shot that is all you can expect.”

Blackmon boasts 32 years of court experience as a lawyer.

Blackmon said her “faith and religious convictions” as a Christian would guide her decisions if she is elected.

Drake bolstered her campaign with her background as a native Natchezian educated in Natchez public schools with experience as both an attorney in private practice and as the Municipal Judge for the City of Port Gibson. She held that position until she was hired to her current job as the City Attorney for Port Gibson. She previously worked as an assistant in the Attorney General’s office, prosecuting cases all over the state.

She left Natchez, “only to be educated and trained to come back home” and use her experience and education to help her hometown, she said.

“You don’t get to this position unless people trust you and they trust you because they’ve seen your body of work. … I will make the tough decisions. I’m not afraid to do that because I know that is what my oath will be. To make the tough decisions and apply the facts to the law. It sounds simple because it is. I will not be influenced by whom you know, who you are or how much money you have. That is not anywhere in the oath I will take.”

Pintard offered different experiences, having served the Natchez Police Department as a felony investigator before earning a law degree from the University of Mississippi. He began practicing law with his father in 1995 and still practices solo after his father retired.

Pintard said as a judge, he would make case rulings in a way that defense attorneys, the District Attorney’s Office and the law enforcement community would understand how the laws were applied to them.

“The only way I see to improve our justice system is through our personnel in court,” Pintard said. “The laws are pretty much going to say the same and the rules are going to stay the same. We have no control over that.”

Pintard said the police and sheriff’s departments are constantly working to improve their departments to better protect and serve the community and the court system should do the same.

“The secret to helping law enforcement is through a good defense council,” he said, adding a better understanding of how the defense works would help law enforcement and prosecutors develop “rock solid” cases.

Pintard said he would also utilize programs to help people in the drug court system become productive citizens rather than being thrown to the wayside.

As the only incumbent judge in the race, Blackwell said she is the most qualified having worked in all positions of the Circuit Court during her career. She was an Assistant District Attorney in Adams County prior to serving as a judge and also worked in private practice.

“I know everyone who has been involved in Circuit Court, what everyone’s role is and what their job is,” she said. “In addition to experience, I stand on my reputation. I have a reputation for being a person of integrity. I am honest, open-minded and fair.”

Blackwell said she also has a reputation for handing out “a lot of tough sentences” to those deserving of them and being considerate of those who deserve a second chance. Blackwell also utilizes drug court, Damascus Road and Mercy House to rehabilitate convicted persons, she said.

“It is my job as a judge to ensure that everyone who is in my courtroom has a fair trial,” she said. “I make my decisions based on the law and the facts. It is not a popularity contest.”

Blalock said he has represented “the good, bad and the ugly” in thousands of cases. He added region’s criminal justice system is broken and that it’s no judge or lawyer’s fault.

“Most of the time there is a jury involved and that is where everyone else is involved. Everyone in the county to some extent participates in Circuit Court with us. We all work to make the system work. The problem is here, the system isn’t exactly working. It hasn’t worked for a long time. … For years we’ve had this concept that we’re just going to send people off to the warehouse at MDOC. Well, the department of corrections got full. If you haven’t noticed, they’re kicking them back out on the street. It’s frustrating and the judge can only do so much.”

Blalock said he would also utilize drug courts and intervention courts to keep nonviolent offenders “on a short leash,” which would save money on incarceration costs.

“Back in the ‘90s, you could be charged in December, have an indictment by March and have your trial by May. Now, you’re charged in October and a year and a half from now you may have an indictment and six months further on you may have a trial. There are many people who sat in jail for two or three years. That is unconstitutional and as a judge, we would have to make that decision. Do I let a violent person out on the street? Well, they have a right. They’re not guilty. They have a right to bail and you can’t hold people in perpetuum. As a Circuit Judge, I can put pressure on the District Attorney’s Office and say either bring them forward or I’m going to give them a bail that they can make.”

Maher said in addition to having experience in private practice, she has served as Justice Court Judge since 2017, as a municipal and youth court prosecutor, public defender, and as a federal court public defender appointed by Judge David Bramlette III.

She also has healthcare education and experience as a registered nurse with specializations in psychiatric and behavioral health issues.

“My background and education make me the most qualified candidate,” Maher said. “For those of you in District 6-2, you’ll see that on the ballot I’m the last name. There are two reasons for that. Number one is alphabetical and number two is we save the best for last.”

She said her campaign thus far has included a listening tour that included more than 8,000 people that she visited both door-to-door and during social events.

Maher said she has spoken with ex-convicts, teachers and preachers. Through these encounters, she learned ways to help each of their concerns, by “being patient as a judge and letting people have their say in court.” She would advocate special interest programs like mental health courts, veteran’s courts and reentry courts and help others make them happen, she said.

“People like to get the chance to tell you what is on their mind,” Maher said. “They like candidates who reach out to them personally. I’ve heard, ‘You’re the only candidate who has ever come out to see me. You have my vote,’ literally hundreds of times.”