Loy family selling The Markets to Harps Food Stores, based in Arkansas 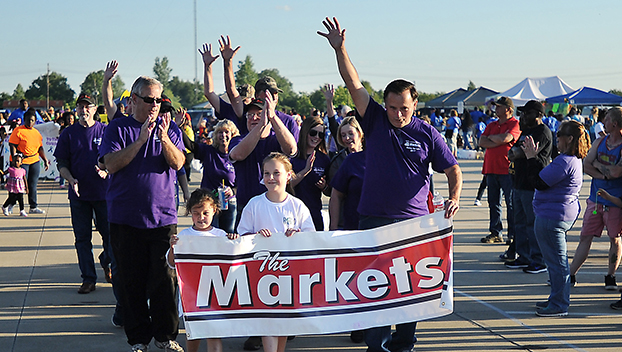 The Markets Relay for Life team are introduced during the 2017 event at the Concordia Parish Recreation complex. The Markets have raised more than $425,000 in donations for Relay for Life since they joined the annual fundraising effort, as well as countless other funds raised or donated to a myriad of other community organizations. (Ben Hillyer / The Natchez Democrat)

NATCHEZ — Barry Loy started punching a time clock at The Big Star on the bypass in Natchez when he was about 15. However, he had worked in the store for his father for years before that.

Loy, president of Supermarket Operations, which owns seven grocery stores in Louisiana and Mississippi, will soon punch out for the last time when he closes a deal to sell the company to Harps Food, headquartered in Springdale, Ark. 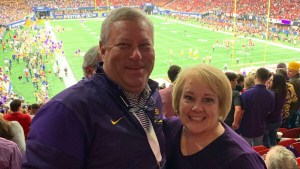 From left, Barry and Sue Loy at the SEC Championship in December 2020 in Atlanta.

“They are a good company,” Loy said. The Loys have an agreement with Harps that will continue the jobs of current employees. Their seniority, vacation time, and benefits will be left intact, Loy said.

“They are hiring all of them. When the deal closes, they will end the day working for us and begin the next day working for Harps. They won’t miss a beat,” Loy said. “Nobody will lose a job if they don’t want to. They need good people, too.”

Barry Loy and his brother, Jeff Loy, vice president and treasurer of the company, are sons of Harley Loy, who founded The Markets. He died in July 2019.

Harley Loy, a native of Arkansas, took over Lewis’s grocery in Natchez in 1969, which became The Big Star.

The Loys and The Markets are known for “paying their civic rent” and being ardent supporters of the communities in which they operate. In addition to three stores in Natchez, the Loys have stores in Ball, Ferriday, Vidalia, Louisiana, and another in McComb.

Barry Loy said they are leaving the company in good hands.

“They are a good company. We had multiple offers, which makes your head swell a little, and Harps Food was the best fit for our community and us,” he said.

Harps is the largest employee-owned company in Arkansas and operates 135 stores in four states — Arkansas, Oklahoma, Missouri, and Kansas. It is 100 percent owned by its employees, said a press release issued by its Chairman and CEO, Kim Eskew. Harvard and Floy Harp in Springdale, Arkansas founded the company in 1930. It currently employs 6,800 associates.

Loy said the decision to sell the company was bittersweet.

“I grew up in these stores. It was time. We are in great shape. Sales are great. It was just a timing thing for Jeff and me. They always say get out while you are on top. We are kind of at the top of our game,”

Loy and his wife, Sue, have no plans to leave Natchez.

“We have a grandchild coming soon in Baton Rouge and have other grandchildren here. You just aren’t going to get Sue Loy too far away from her grandchildren,” Loy said, although the couple does plan to travel.